Paso Robles News|Thursday, May 6, 2021
You are here: Home » State » Rob Bonta sworn in as new attorney general of California

Rob Bonta sworn in as new attorney general of California 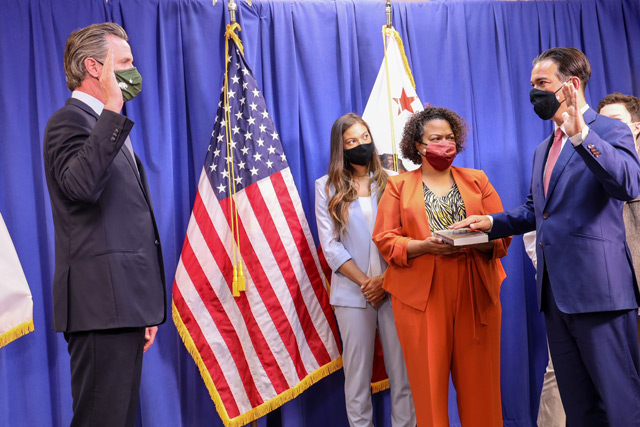 –On Friday, Gov. Gavin Newsom swore in Assemblyman Rob Bonta as California’s 34th Attorney General. “A national leader in the fight to reform our justice system and stand up to the forces of hate, Bonta is the first Filipino American in the state’s history to serve in the role,” Newsom said in a press release.

“California and the nation need leaders like Rob Bonta to meet this pivotal moment in our history with the courage, energy and tenacity it will take to shape a society more reflective of our values,” said Newsom. “Carrying the lessons of his remarkable upbringing at the center of historic social justice movements, Rob has been at the forefront of courageous fights for racial, economic and environmental justice from day one. As Attorney General, Rob brings to bear the legal and moral authority to effectively engage a broad array of groups – community leaders, law enforcement, the Legislature and more – in a meaningful dialogue, so that California continues to build bridges and advance together in a direction that does justice to all our communities.”

Confirmed by the legislature on Friday, Bonta was selected by Newsom to fill the position vacated by Xavier Becerra, who was recently sworn in as Secretary of the U.S. Department of Health and Human Services. The governor announced the nomination last month at the historic International Hotel in San Francisco, a site where Asian and Pacific Islander Californians famously rallied in 1977 to save the homes of elderly residents and preserve their community.

“Thank you, Governor Newsom, for the faith and trust you have placed in me. Serving as California’s Attorney General is the honor of a lifetime,” said Attorney General Rob Bonta. “There are a lot of challenges we face across America today. People see institutions that work well for those with wealth and power – at the expense of everyone else. We see hate on the rise. And too often, justice and accountability for those who harm others feel out of reach. As The People’s Attorney, I won’t back down when I see Californians hurt. Together, we will get justice for families cheated by multi-national corporations. We will defend communities ravaged by big polluters. We will work to repair our justice system, and we will attack the forces of hate and white supremacy. I’m excited to get to work!”

Labor, environmental and criminal justice reform advocates welcomed the appointment: “We congratulate Governor Gavin Newsom on the appointment of Rob Bonta as Attorney General of California, the first Filipino American in the state’s history to serve in this role. At an early age, Bonta learned about the values of social justice from his parents who worked for Civil Rights in the South and joined Cesar Chavez and myself as full-time volunteer organizers for the United Farm Workers,” said labor leader Dolores Huerta. “Rob Bonta has fought diligently throughout his career to correct the injustices affecting working families and Communities of Color. We are confident that Rob Bonta will work passionately to ensure our justice system protects all Californians. Si Se Puede!”

“CEJA celebrates the swearing-in of Attorney General Rob Bonta. We know he will be a strong ally for all environmental justice communities that have been harmed by pollution and often poverty,” said California Environmental Justice Alliance (CEJA) Executive Director Gladys Limon. “We have worked closely with Mr. Bonta and consider him a leader and friend, and trust that he will fight tirelessly on behalf of all Californians and not be afraid to hold polluters accountable.”

“This is a historic day for California. I’m so proud to see Rob Bonta sworn-in as California’s new Attorney General,” said REFORM Alliance Board Member and award-winning journalist Van Jones. “Rob is a lifelong leader in the fight to restore justice in California. I’ve known Rob for decades and he’s demonstrated time and again the commitment and capacity to reform critical elements of our criminal justice system including providing key support for the REFORM Alliance’s major probation legislation. I have every confidence that Rob will make a phenomenal California Attorney General.”

The son of activists, Bonta grew up in a trailer in La Paz, where his parents served at the headquarters of the United Farm Workers movement. Inspired to pursue justice through the law, Bonta studied at Yale Law School and went on to work pro-bono protecting vulnerable Californians from exploitation and racial profiling. He served nine years as a Deputy City Attorney in the San Francisco City Attorney’s Office before running for local office in Alameda County. In 2012, Bonta became the first Filipino American in California history to win election to the Legislature, representing Assembly District 18 in the cities of Oakland, Alameda and San Leandro. Bonta has passed major reforms that reversed long-standing injustices:

Outlawed For-Profit Prisons in California: Bonta authored legislation that made California the first in the nation to ban for-profit prisons and immigration detention centers.

Took on Big Polluters: Bonta authored major environmental justice legislation and has been a leader in the fight against climate change and to ensure every community equitably benefits from our green economy.

Required Independent Investigations of Unarmed Deaths: Bonta co-authored the law that required an independent investigation when there is a death of an unarmed civilian by law enforcement.