Paso Robles News|Saturday, June 25, 2022
You are here: Home » Region » Rocket back to 1938 with dinner and a movie at Santa Maria Flight Museum 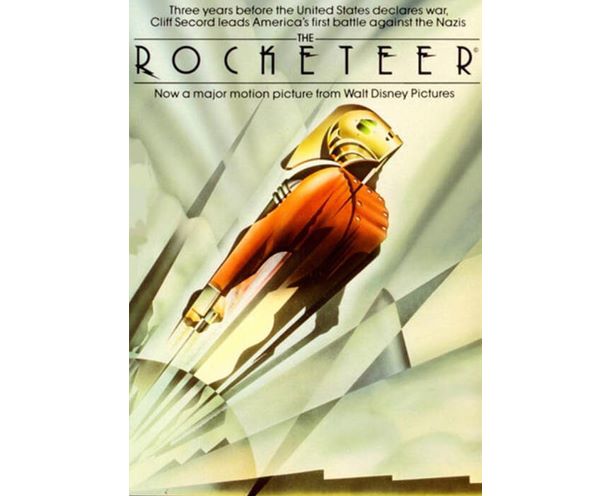 Movie has a connection to the Central Coast, as some of their film locations included the Santa Maria airport.

‘The Rocketeer’ to be screened, marking 30th anniversary of film’s release

– It’s been 30 years since the art deco adventure graced the silver screen, but the 1991 Disney movie “The Rocketeer” has been growing in the fandom world. This action-packed movie not only has actors such as Jennifer Connelly, Alan Arkin and Billy Campbell; but also a connection to the Central Coast, as some of their film locations included the Santa Maria airport.

The Santa Maria Museum of Flight has partnered with the Central Coast Film Society to celebrate the 30th anniversary of its release with dinner and showing of the film on Saturday, Nov. 13. The event will raise funds for the museum, the CCFS student film competitions, local veteran group Band of Brothers and the Civil Air Corps. Doors will open at 5 p.m. for tours and a prime rib dinner, with the film starting at 7 p.m.

“The Rocketeer left a big impact on the Central Coast when it filmed here,” said Daniel Lahr, executive director of the Central Coast Film Society (CCFS). “Many locals were recruited to be extras for the air show sequence, and several sets and props remained including the hangar set, which now houses the Santa Maria Museum of Flight.”

Set in Los Angeles in 1938, “The Rocketeer” tells the story of a rocket pack designed by Howard Hughes being stolen from his factory by members of mobster Eddie Valentine’s gang, who are pursued by FBI agents to an airfield, where they are caught. Stunt pilot Cliff Secord (Billy Campbell) discovers the jet pack that enables him to fly with the help of mechanic A. “Peevy” Peabody (Alan Arkin), according to Disney synopsis of the film. Cliff’s heroic deeds attract the attention of Howard Hughes and the FBI, as well as Nazi operatives, who kidnap Cliff’s actress girlfriend Jenny Blake (Jennifer Connelly) in exchange for the rocket.

“The museum has kept the spirit of the movie alive by restoring and maintaining the original painted sign on the building from the movie,” Lahr said. “The movie itself pays homage to the fun, comic book serial stories of the 1930s and ’40s.”

The Museum of Flight at G. Allan Hancock Airfield reopened earlier this year after refurbishing several of their displays. Improvements were made to the hangar. The building houses many unique displays of local aviation interest, along with some additional props from the movie.

“The set piece hangar from the movie ‘The Rocketeer’ has been a central display space and a core attraction of the Santa Maria Museum of Flight since the movie was filmed,” said Museum of Flight board member Richard Persons. “The most important museum displays are housed in the Disney hangar structure, and it continues to be a huge draw amongst fans of the movie, who often pose for pictures in front of the iconic ‘Bigelow Aeronautical Corp’ sign.”

Band of Brothers was chosen by the museum and CCFS to receive a portion of the ticket sales since they are a local nonprofit dedicated to helping homeless veterans as well as supporting veteran owned businesses. Visit www.echovets.org for more information about their initiatives.

Docent-led tours are available, and special tours or private events can be arranged by calling the museum at (805) 922-8758.
Tickets for the screening are $40 and include a museum tour, screening, a tri-tip dinner and a drink ticket sponsored in part by Michelob Ultra and McClain Cellars. Visit https://www.centralcoastfilmsociety.org/events.html to purchase tickets.