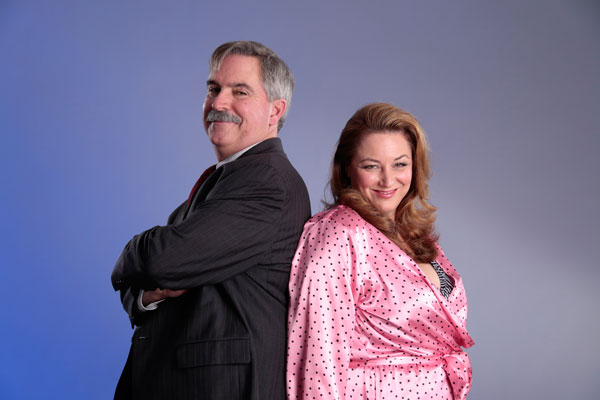 Actors David Norum and Kristen Saunders star in “It Had to Be You.”

Wine Country Theatre, a new community-based theatre, is preparing to open its debut production, It Had to Be You, at Via Vega Winery in Paso Robles.

Founder Cynthia Anthony credits Via Vega Winery owners Larry and April Gomez with providing a fantastic opportunity for the performing arts to thrive by providing the venue. Located in their large warehouse/tasting room, the platform stage is an intimate theatre, set amongst the wine barrels. Audiences will sit at small tables and be able to purchase and enjoy the award-winning Via Vega wines while watching the
professionally produced show.

It Had to Be You, a romantic comedy written by Renée Taylor and Joseph Bologna, opens February 21 and runs on Friday and Saturday nights through March 15 at 7:30pm. The hilarious sit-com type play tells the story of an eccentric actress who meets the man of her dreams, only he has different plans.

After she holds him hostage in her apartment, she eventually wins his heart. Love prevails, but the course of love never does run smooth, and their love story is the perfect light entertainment to enjoy while sipping wine. Theatre and wine are the perfect combination, having been the basis of the Ancient Greek Festival of Dionysus, the god of wine and theatre, and sex, too, for that matter.

Executive Director of Wine Country Theatre, Cynthia Anthony, states that, “This is a truly unique opportunity, to present fully produced plays actually in a winery. To my knowledge, this is not happening in Napa or any other major wine region in the country. Of course the performing arts are well represented with musical acts of all kinds, but to enjoy a show with live, professional actors in the intimacy of a winery is new, and exciting.”

Tickets to It Had to Be You can be purchased on the Via Vega Winery website – www.viavega.com. Tickets are $25 each. For more information about Wine Country Theatre, please check the website – www.winecountrytheatre.com.