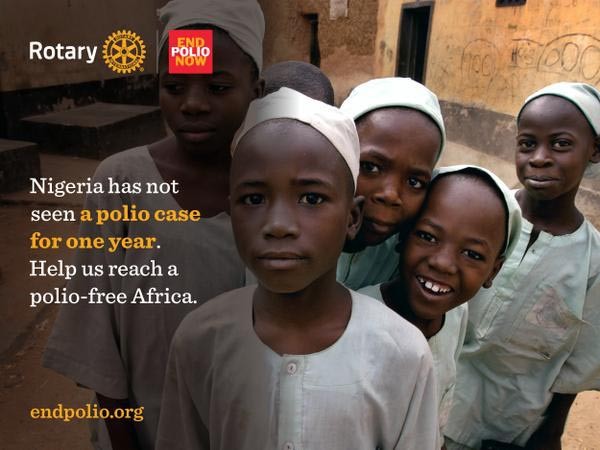 – Friday marks one year since the last case of wild poliovirus was found in Nigeria, the only remaining country in Africa where polio had never been stopped. This achievement could signal that the world will soon see a polio-free Africa, a major milestone in global public health. The Rotary clubs of Paso Robles, Templeton and Atascadero along with their surrounding communities have long supported efforts to end this crippling disease, through donations and fundraising activities.

Rotary — the global organization composed of more than 34,000 community-based Rotary clubs — has been a leader in the fight to eradicate polio since 1985, when it launched Polio Plus, the first global initiative to immunize children against polio. The organization has contributed more than $1.4 billion to efforts to end the disease.

Nigeria’s last polio case occurred on July 24, 2014, in southern Kano state. As a result, the World Health Organization may soon remove Nigeria from the list of polio-endemic countries. Africa hasn’t seen a new case since August 11, 2014. When Nigeria and the entire African region go three years without a case of polio, WHO will certify them as polio-free. In 2014, the organization declared India and its Southeast Asia region polio-free.

Despite today’s milestone, experts caution that the world must remain vigilant. The next two years will be critical to ensuring that Nigeria remains on track and keeps polio from returning. The support of donors, governments, and partners like Rotary is needed more than ever to ensure there is no recurrence of the disease.

Beyond Nigeria, Pakistan and Afghanistan are the only countries left where polio has never been stopped. According to experts, eradication efforts will be most challenging in Pakistan, which accounted for nearly 90-percent of the world’s polio cases in 2014. But there has been recent progress. In June, Pakistan reported a decline of more than 70 percent in polio cases in 2015, compared with the same time period last year. Also, Rotary and its partners are implementing innovative new strategies to address the challenges there.

Rotarians want to encourage their local communities to support Rotary’s efforts to end polio by visiting endpolio.org to donate and to learn more.

Rotary brings together a global network of volunteer leaders dedicated to tackling the world’s most pressing humanitarian challenges. Rotary connects 1.2 million members in more than 34,000 Rotary clubs around the world. Their work improves lives at both the local and international level, from helping families in need in their own communities to working toward a polio-free world.

When Rotary launched its polio immunization program, PolioPlus, in 1985, polio struck more than 1,000 children around the world every day. Fewer than 400 new polio cases were confirmed in 2014 – primarily in Nigeria, Pakistan, and Afghanistan, the only countries where polio has never been stopped.

As the volunteer arm of the Global Polio Eradication Initiative, Rotary has contributed more than $1.4 billion and countless hours of volunteer service to ending polio. Through 2018, every dollar Rotary commits to polio eradication will be matched two-to-one by the Bill & Melinda Gates Foundation, up to $35 million a year. To date, more than 2.5 billion children have been immunized against the paralyzing and sometimes deadly poliovirus.

Visit rotary.org and endpolio.org for more about Rotary and its efforts to eradicate polio.