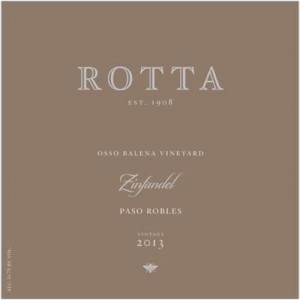 Rotta Winery, originally established in 1908, has announced a new direction under the leadership of General Partner Jason Shorrock.

“We are so very proud to have resurrected many of the stories and legends from our historic winery without losing site of the winemaking. Under the guide of our acclaimed winemaker, Jeff Branco, we are introducing a new line of wines using innovative techniques and adhering to the historical ‘DNA’ of our property on the west side of the Paso Robles AVA. Our team’s sixth sense has always told us that we had something special at this location but it wasn’t until we decided to take a ‘chapter one’ approach to the wines, viticulture and history that we were able to discover this location as the cradle of what would become the Paso Robles AVA,” says Shorrock.

“In the late 19th and early 20th century, San Luis Obispo County was sparsely planted to a few vitis vinifera (wine) grapes. In those days, there was rarely a conversation about the species or individual character of a varietal. The grapes were brought from Europe or from the emerging Napa Valley by Italian and French American immigrants as the ‘Red’ or ‘White’ that they grew near their home. There was no fuss, just field-blended wine that found its way on to the family table in a stemless glass. Rotta has now introduced a line of wine that is in that very vein, with 21st century style and character; higher quality and a lower cost to the consumer. We offer a red blend, a white blend, a single vineyard Zinfandel, Rose’ and our famous Black Monukka dessert wine,” Shorrock explains.

The 2013 red blend is of Bordeaux varietals such as Merlot and Cabernet. It is aged for a short time in French Oak so that the wine is clean, sophisticated, value oriented and approachable ($20).

The white blend is in the same tradition of the red, which is made as a style, not a variety. Primarily Sauvignon Blanc, the wine is similar in style to the aromatic blended whites of Orvieto in the Umbria Region of Italy ($17).

The rose’ is another blend that is approachable and consumer friendly. Made in the Saignee or “bleed-method,” which combines red and white wine together for a refreshing wine ($17).

One of the first grapes planted in San Luis Obispo County were zinfandel and Rotta is no different. They have renamed the zinfandel vineyard “Osso Balena,” which is Italian for whale bone. The property, like others in the area, is a former sea bed where many fossilized whale bones were found in our limestone rock formations. The “new era” Osso Balena Zinfandel is packed with structure, sophisticated fruit character and ripeness ($42).

When asked about his winemaking at Rotta, winemaker Jeff Branco explained, “I focus on making balanced, ripe wines that are a reflection of the soils and climate’s typicity. At Rotta, we have two simple rules that start with picking grapes at their ideal ripeness and then preserving that character through our approach to winemaking.”

Branco joined Rotta in 2013 as the 3rd American to receive a Masters of Viticulture & Enology from the University of Bordeaux. In his career, he has served as Assistant to Winemaker at Pape Clement, Pessac-Leognan and Cellar & Vineyard Worker at Maison Sichel, Bordeaux. Branco was trained by esteemed consulting winemakers (Michel Rolland, Pascal Ribereau–Gayon and Denis Dubourdieu) and served as Winemaker for JUSTIN Vineyards & Winery, where he received a Wine Spectator Top 10 and two Top 100 awards in five years. He is the first winemaker to receive a 95pt. rating (WS) for a Paso Robles wine (’00).

Rotta Winery is the oldest continually operating, family owned winery in the Paso Robles AVA, producing Zinfandel, Bordeaux varietals and its “famous” Black Monukka dessert wine. Originally built in the late 1800’s by Frenchman Adolph Siot, it was sold over 100 years ago in 1908 to the Rotta family after, decades of successful operation in Templeton, CA.