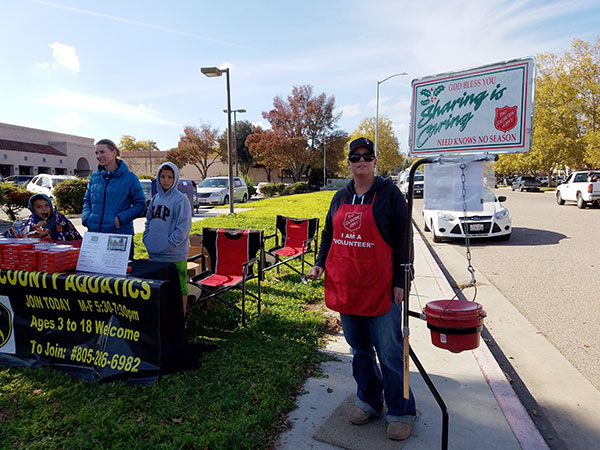 Paso Robles volunteers with North County Aquatics and the Salvation Army on the sidewalk on 6th St.

— For the first time in nearly 40 years, the perennial red Salvation Army kettle and ringing bell won’t be a mainstay in front of the entrance to the Paso Robles post office on 6th Street. Both the Salvation Army and the North County Aquatics Swim Team were removed to the curb yesterday by a post office official, who banned the charitable groups from soliciting donations at the doors to the main entrance.

Volunteer bell ringers now man the kettle at the end of the driveway exit, approximately 25 yards away. An organizer with the North County Aquatics swim team told reporters they had already arranged to fill 120 volunteer shifts between now and Christmas, while a Salvation Army representative suggested fewer volunteers would be willing to work the sidewalk, where it is more challenging to collect donations.

A temporary postmaster named Kelsey Trevino taking over from recently retired postmaster Mike Milby came out on Monday and told both groups to move, citing long-standing postal regulations. No reason was given for the sudden change and the woman referred reporters to USPS public information officer Meiko Patton in Sacramento.

“Soliciting on postal property is not permitted according to postal regulations, other than in accordance with the Combined Federal Campaign (CFC) regulations,” Patton wrote, responding to a written query. She said that postal employees give generously to support “numerous charities through the CFC.”

Patton added, “In years past our postmasters either weren’t aware of this national policy or decided to ignore it. However, since this is our policy, we have to abide by it.”

Recently, panhandlers and other solicitors have been asked to leave in front of Target and other stores in Paso Robles. A manager at Trader Joe’s would not go on record on TJ’s policies but earlier this week a poor family asking for alms was observed being removed from near the front of its Templeton store.

Linda Midkiff, a longtime Paso Robles resident and seasonal volunteer with the Salvation Army and Paso Robles Rotary, said, “You have Paso Robles high school kids learning about charity and helping others ringing the kettle bell…Now if I were a potential donor and driving out, I wouldn’t pull over to make a donation, I would drive on.”

Midkiff said the postmaster opted to enforce regulations after receiving a complaint phoned in from Jehovah’s Witnesses, who were previously told to leave. “This is a different situation,” Midkiff said. “I’m not trying to convert anybody or handing out any literature, all I’m doing is ringing a bell for donations.”

She said volunteer bell ringers are canceling, because they don’t want to stand outside with no protection from the elements.

A local Salvation Army spokeswoman named Beth said all the funds raised are used for emergency situations to help people who need money for food or shelter, and all the money raised stays here in Paso Robles. “This holiday time is the big fundraiser for the year,” she said. “Last year we brought in over $11,300 at the post office.”

Midkiff echoed the severity of the situation when she commented: “What I don’t understand is, why you would want to hurt your community? We had a great relationship with the previous postmaster.”

Beth, the Salvation Army volunteer, said, “I’ve been working to prepare this Christmas drive since September. If I cannot bring in that money in the kettles, services will be reduced for those in the area.” 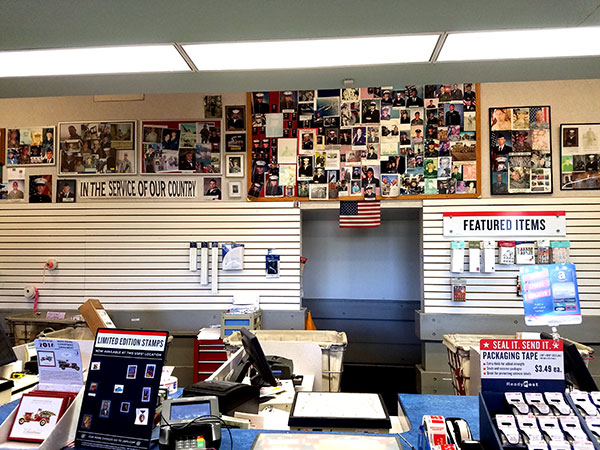 The post office on 6th Street in Paso Robles.