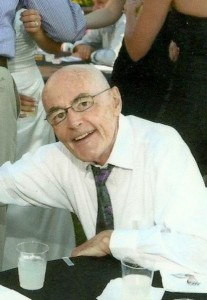 – Sam Weir of Templeton, CA, passed away during the night of June 11, 2015 at the age of 79. He was born in Freeport, Illinois, the son of Glendon Weir. Sam was a man of character and integrity, who had the hardest of childhoods, but resiliently overcame adversity and became a success due to his hard work, strength of character, and belief in God. Sam had two brothers, Glendon Weir of Maryland and Thomas Weir of Arizona, who preceded him in death.

He was the former Senior Vice-President of Getty Synthetic Fuel and an independent attorney for many years. Sam was preceded in death by his first wife, Penny, and most recently he lost his second wife, his beloved Joan, also of Templeton in July of 2014 and is now at her side in heaven. Sam never had an enemy in the world. He was also a reservist in the U.S. Army and followed up those years attending and graduating from Point Loma University and UCLA Law School where he won many honors.

But those were not the things one thought of when thinking about Sam. One would think, upon knowing him, that he was a “true man of God,” and those were the things Sam felt were truly important – walking right with the Lord and treating people with the love of God. Sam was on the Board of Elders at Highlands Church in Paso Robles and volunteered many hours for both Christian and secular charities in the area.

He leaves behind to mourn him: Daughters, Tracy Bower (David) of Brentwood, CA and Tamela Cegelske (Jerry) of Ketchikan, AK, as well as very much cared for and loved grandchildren, Matt Maae, Sean Smith, Brandy Cooper, Summer Rego and Blake Bower. After the loss of his beloved Joan, grandson Sean Smith cared for Sam during the last of his time on this earth. They were truly inseparable, with each learning from and enjoying each other’s company. They were self-sacrificing in different ways in an effort to “be there” for each other.

He also leaves behind very close friends, including Dr. Gregg and Lauri Ellison, who have been indispensable to our family over the last year. Sam spent many years mentoring and teaching Christian values and character, not only to members of his family, but in the community as well. He was a loving and truly caring man. He was greatly loved and will be greatly missed.