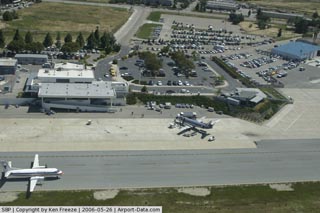 The DFW route has long been sought after in San Luis Obispo, and comes after years of work on behalf of the airport, Visit SLO CAL, the County and several regional partners.

“This Dallas flight is an important part of our strategy to establish SLO CAL as a leading destination,” shared Chuck Davison, President and CEO of Visit SLO CAL. “Increasing air service into SLO CAL is not only vital to the strength of our tourism industry, it is essential to the sustainability of our economy and overall quality of life. These new flights don’t just connect people, they connect economies and each time we do that we make this an even better place to live, work and visit.”

Adam Hill, Supervisor for the County’s 3rd district, which encompasses the airport, said, “Nothing has been more exciting and impactful to this county’s economy like the continued growth of our airport and the service it provides to business people and tourists alike.”

The announcement continues the impressive growth trend at San Luis Obispo Airport. SBP was recently named one of the fastest-growing airports in North America, registering a 23.4-percent passenger increase from 2016 to 2017. In total, the airport has virtually doubled its passenger numbers over the last five years.

“More passengers are flying local because we’re providing so many opportunities to effortlessly get anywhere in the world,” said Kevin Bumen, Director of Airports. “With this flight, we’re not just getting connections to the Dallas/Ft. Worth Metroplex—although that in itself is huge. We’re also getting 89 additional connections through one of the busiest airports in the country. The airport and its partners work relentlessly to provide new connections through powerful airline networks, and the results are really starting to accumulate. In one stop, you can now get to Belize, Beijing or Boston, Lima or Rome or Wichita. All from San Luis Obispo. It’s incredible.”

The route will be served on an Embraer 175 jet, equipped with 12 First Class seats, 20 Main Cabin Extra seats offering additional legroom and 44 seats in the Main Cabin. Tickets for the new Dallas/Ft. Worth flights will be available for purchase beginning December 17; visit aa.com to book.