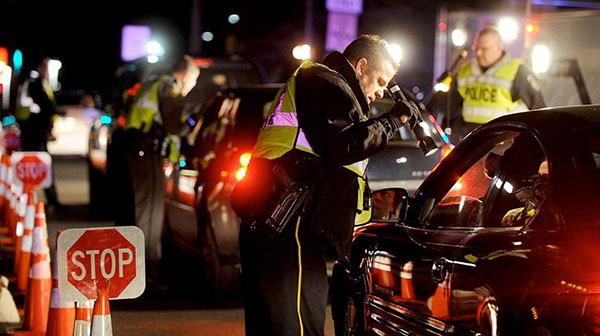 Local law enforcement will step up DUI crackdown as of Dec. 16

— This holiday season, San Luis Obispo police will be out looking for drunk and drugged drivers as part of a special year-end Drive Sober or Get Pulled Over enforcement mobilization.

“Beginning Dec. 16 and continuing into 2017, you will see stepped up enforcement watching closely for anyone who is driving impaired,” said Chief Cantrell. “We want to keep our roads safe for holiday travelers, so we will have zero tolerance for drunk or drugged driving.”

As part of the Drive Sober or Get Pulled Over enforcement campaign period, police, sheriff and the CHP will be deploying DUI Checkpoints and DUI Saturation Patrols during the upcoming 17-day DUI crackdown throughout the region. San Luis Obispo Police Department is conducting a DUI checkpoint on Dec. 16, and DUI saturation patrols on Dec. 17, 20 and 29.

Drugs such as prescription medication, marijuana or illicit drugs can impair judgment and get you the same DUI arrest as alcohol. Nationally in 2014, 32,675 people were killed in motor vehicle crashes with 9,967 people killed in crashes involving an impaired driver. In California, total highway deaths were reported at 3,126 with 1,155 lives lost in alcohol and/or drug impaired collisions. If you’re caught driving impaired by alcohol or drugs, you could face jail time, fines, loss of driver’s license, towing fees, and other DUI expenses,
totaling $10,000 on average.

“Driving under the influence is not only costly, but can ruin the holidays for you, your family or for someone else’s family,” said OTS Director Rhonda Craft. “Make the decision to drive sober or use our DDVIP app to help you find a safe ride home for yourself or your friends if you know they’ve been drinking.”

Drivers are encouraged to download the Designated Driver VIP, or “DDVIP,” free mobile app for Android or iPhone. The DDVIP app helps find nearby bars and restaurants that feature free incentives for the designated sober driver, from free non-alcoholic drinks to free appetizers and more. The feature-packed app even has social media tie-ins and even a tab for the non-DD to call Uber, Lyft or Curb.

For more information on the Drive Sober or Get Pulled Over enforcement campaign and all OTS efforts, visit www.ots.ca.gov. To learn more about the DDVIP app, please visit the OTS Facebook at www.facebook.com/CaliforniaOTS or follow OTS on Twitter @OTS_CA.

The San Luis Obispo Police Department wants everyone to have a safe and memorable holiday season, and is calling on everyone to be alert, “Report Drunk Drivers – Call 911!”

Funding for this holiday enforcement campaign is provided by a grant from the California Office of Traffic Safety, through the National Highway Traffic Safety Administration.