Good Samaritan picks up victim and attempts to drive away, gets hit, chased by suspect 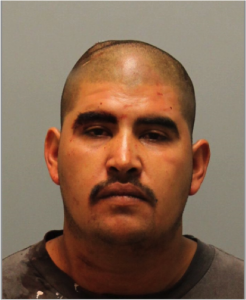 Officers were dispatched to the 1100 block of Black Oak Drive for a report of woman screaming from a car. Officers eventually located a single car collision on Highway 46 East near 24th Street where Martinez had collided with a freeway barrier.

An investigation revealed that a female victim whose identity was not released was assaulted by her boyfriend, Jose Ayala-Martinez, in a restaurant parking lot near the 1300 block of 24th Street. A witness saw the assault and Martinez forcing the victim into a car. The witness also watched as the victim escaped the car as it began driving away.

The witness attempted to help the victim by picking her up and driving away in his own car. Martinez then used his vehicle to ram the witnesses’ car and another uninvolved vehicle which was passing through the area. The witness and victim attempted to flee the area with the suspect pursuing them.

Martinez eventually crashed his car into a barrier on 46 East just north of 24th Street. Martinez’ car became disabled and he was injured as a result of the collision. The victim and Good Samaritan witnesses were evaluated at a local hospital as a precautionary measure and released. The suspect was transported to county jail after receiving hospital treatment for injuries he sustained in the intentional collision.