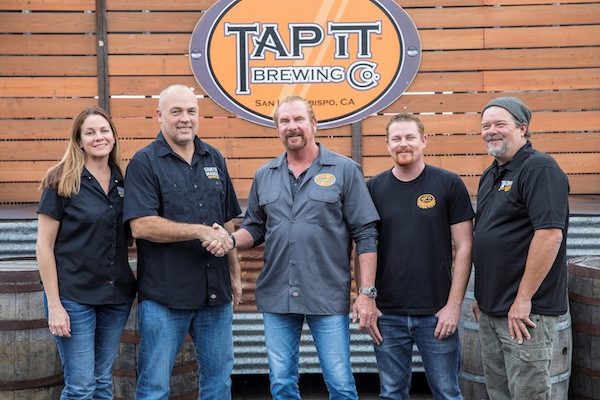 Santa Maria Brewing Company purchased all rights and assets to Tap It Brewing Company with a strategic plan for moving forward. Not only are plans in place to sustain the Tap It brand, but to grow and expand the identity that has become a favorite on the Central Coast. The brewery and tasting room will remain and be improved upon with a new draft system, additional taps, and extended hours seven days a week. All staff has been asked to remain onboard through the transition.

Tap It’s five-year brewmaster, Ryan Aikens, shared his insight about the change in ownership and the benefits he found in forging ahead with Santa Maria Brewing Company. “I’m excited about the joining of forces with Santa Maria Brewing Company. As Tap It, we maintain the ability to brew great beers and exceptional one-offs, while getting to enjoy the added pleasure of local self-distribution, which lends to fresher product reaching our loyal customers, and growing that market share. In many ways, it couldn’t be a greater fit. Santa Maria makes fantastic beers with excellent flavor profiles and understands the local taproom experience much better than we do, which is a huge plus for us at Tap It.”

Byron Moles, managing owner of Santa Maria Brewing Company, explained how the alliance will work cohesively to improve both brands. “When we were first approached about the possibilities of putting together a deal with the Gordons between Santa Maria Brewing Co and Tap It Brewing Company, I was a bit hesitant because of all the expansion we are already in the middle of building out. With new facilities in Paso Robles, Atascadero and Santa Maria all under construction the timing at first didn’t feel like the best; San Luis Obispo was going to be our next location.

“After getting to know the Gordons and meeting their team, that hesitation went right out the window,” said Moles of Santa Maria Brewing Co. “The deeper I considered possibilities of the deal, the more it appeared as a must. While Santa Maria Brewing Company has been hard at work expanding our self-distribution area and working on our Tap Room footprint. Tap It has done a fantastic job on distribution throughout other areas and has built fantastic partnerships with some great distributors. Each brewery seems to bring to the table what the other is missing. I believe that with this acquisition, both teams have improved their respective teams tenfold and 2018 will be the beginning of something special for all of us involved. We have a lot of work ahead of us and to improve upon, but we are up for the challenge.”

And formidable, it is. The California Craft Brewers Association (CCBA), which represents the state with the largest number of craft breweries, reports a 300 percent increase in the number of breweries in the last five years to 900 breweries at an economic impact exceeding $7.3 billion.

Not only does the merger contribute to the Central Coast beer economy as one of the fastest growing in the state, it helps support the region for job creation at various levels. “It means we are currently looking for new employees up and down the coast will be hiring everyone from sales peps to delivery drivers,” said Moles. “We did approximately 3,000 barrels last year and are forecasted to do approximately 10,000 in 2018. Tap It makes about 4,000 barrels per year. Their production will increase will all the tap rooms we are opening in 2018.

At Tap It, John and Miles Gordon are enthusiastic about the future of their family-owned company. “Tap It Brewing Co. is proud to announce our partnership with Santa Maria Brewing Company. We would like to personally thank all our customers, patrons, and distributors for supporting our brewery. Our team of dedicated brewers and staff will continue to brew our award-winning beers with the addition of some new ones. Stay tuned for more, onward and upward!”

Soon, patrons will soon enjoy Tap It beers inside Santa Maria Brewing Company tap rooms, and Santa Maria beers will be served at Tap It. In addition, more Tap It locations are being added.