Scholarship awarded to children of farmworkers 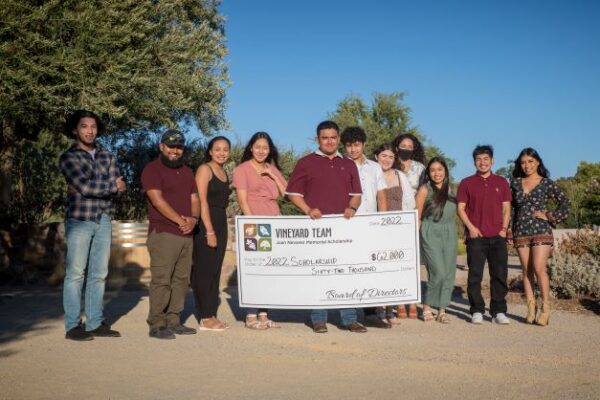 Since 2015, with the help of many generous donors, the program has awarded $210,000 in scholarships based on academic excellence, financial need, and community involvement to students from Monterey, San Luis Obispo, and Santa Barbara Counties. Ninety-eight percent of recipients have been first-generation college students.

“I am proud of breaking the cycle and being the change in my family as the first generation to go to college,” Recipient Alberto Ramirez says.

Three years ago, the program was dedicated to the memory of Juan Nevarez. Nevarez touched the lives of many wineries in the Paso Robles area. Moving to the United States from Mexico when he was 17, Nevarez turned his dreams into reality through grit, hard work, and self-education, establishing his still thriving company Nevarez Farm Labor.

Even with this success, Nevarez dreamed of an education for his children. “Our dad had one requirement for all his children: we must graduate from college,” shares Eufemia Nevarez, Juan’s daughter. “It didn’t matter what we wanted to study or where, but he insisted we don’t come home until our diploma is printed and hanging on the wall in the living room!”

Today, Nevarez’s dream of a better future lives on through the scholarship and all of the recipients.

To make a life-changing impact on a student’s future by donating, visit www.vineyardteam.org/scholarship.