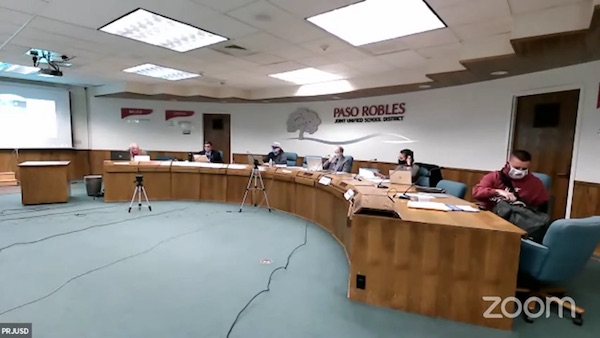 –The Paso Robles Joint Unified School District Board of Trustees met last night in a virtual meeting at the district office board room. The meeting was recorded on YouTube, so it’s available to be viewed by any interested parties.

The school board talked about when the schools will reopen in the district. That process will continue next week with secondary students beginning to return for hybrid learning in the classroom.

Superintendent Curt Dubost said he believed that schools will reopen as normal in August. Trustee Nathan Williams thanked PRPE, the Paso Robles Teachers Union, for helping to get the students back in the classroom. Trustee Lance Gannon agreed with him.

Some members of the public called in to complain about plans to close Georgia Brown Elementary School. Resident Elena Garcia told the board that Measure M allocated money was for repairing the school, but it was ignored. She said, “Now the board is talking about closing it.”

Paso Robles School Board and members of the community will tour some of the properties in the school district on Friday afternoon.

View the meeting in its entirety below: