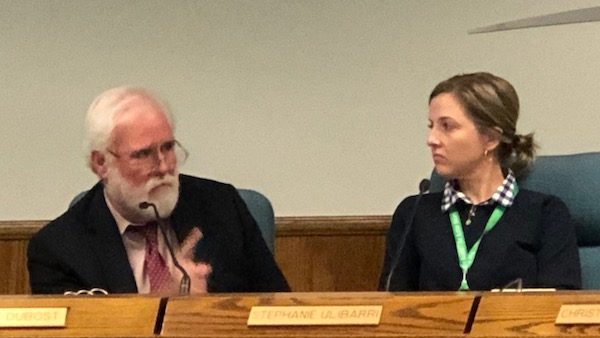 Chief Financial Officer Brad Pawlowski gave a report on finances before the board broke for closed session. Later in the meeting, Pawlowski made another presentation before the board unanimously approved certification of the 2019-2020 First Interim Financial Report. The approval is “qualified,” because projections indicate the budget reserve will drop under the state-mandated 3-percent in the next two fiscal years.

The report indicates that the current budget has created a budget reserve of 3.12-percent, just over the state-mandated 3-percent. But that reserve will fall to 2.82-percent in the next fiscal year, and in 2020-2021, it will drop to 1.27-percent at current spending levels. Superintendent Curt Dubost recommends that the board maintain an ongoing list of budget cuts. He told the board, “We have to find another million dollars to cut from the budget.”

The board is looking at revising transportation in the school district. Pawlowski says currently only 18-percent of the student population rides the bus. That service may be revised to save costs.
The board voted to approve staff recommended expenditure reductions, but will revisit the “ongoing list of budget cuts” in January.

Joel Peterson talked about the impact of declining enrollment to the budget. The district is projecting enrollment will continue to decline slightly in the next few years. The district is also facing a number of lawsuits filed against it by citizens and parents, which may impact the financial well-being of the PRJUSD.

Jim Vaughn is the new Director of the Culinary Arts Academy. He introduced himself to the board. He is from Alabama and said he loves Paso Robles and San Luis Obispo County. Teacher’s Unions representative Jim Stennett talked to the board related to his concerns about the budget crisis but said he’s optimistic that the state will allocate more money for education in 2020.