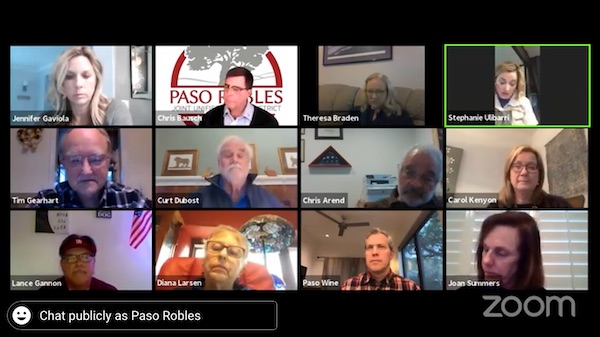 –The Paso Robles Joint Unified School District Board of Trustees held a virtual meeting Tuesday night utilizing Zoom. The PRJUSD Board Room was vacant, but citizens could view the proceedings on Zoom or on YouTube. The board was positioned on the screen like the Hollywood Squares.

The trustees heard from Superintendent Curt Dubost about actions taken in response to COVID-19. Schools are closed until further notice, and the district is trying to protect people who distribute meals and reading material to students during the noontime pick-up at Paso Robles High Schools and Culinary Arts Academy.

The board had a heated discussion about options for the temporary campus next to Flamson Middle School and the Glen Speck school site. There are several options including sending 6th-grade students to elementary schools and closing Bauer Speck Elementary School. The board directed staff to refine the options. The board is expected to make a decision at its meeting on April 28th.

The trustees also received a report from San Luis Obispo County Office of Education accountant Diane Larson, who is helping the district reach the state minimum of a three-percent budget reserve. She said that unless the board does something drastic, like close a school, it’s not likely that they will get the budget reserve back above three-percent for next year. She says County Superintendent of School James Brescia understands that. She says in light of the current economic shutdown, many California school districts may experience economic hardship in the coming fiscal year.

The board will meet again on April 28th. It’s expected that the meeting will also be held online.