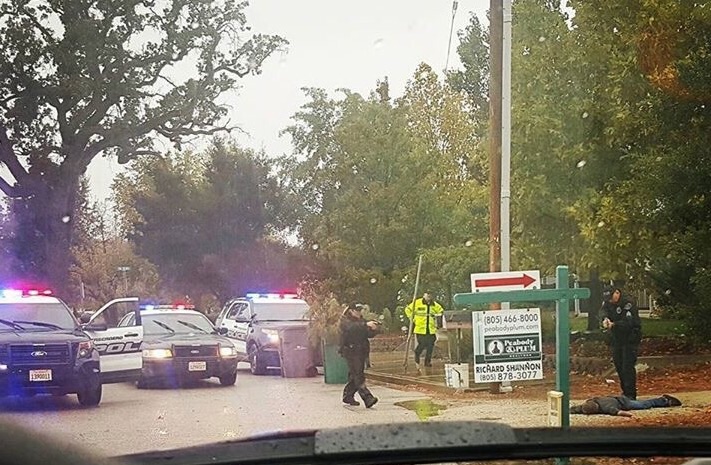 Police search for the individual who allegedly entered San Benito Elementary School and then fled Monday.

–On Monday, at approximately 12:18 p.m., the Atascadero Police Department responded to the area of Del Rio Road and San Benito Road regarding a traffic collision with the driver possibly being under the influence. The driver of the vehicle had fled on foot and had jumped a fence onto the property of San Benito Elementary School, according to a press release from the City of Atascadero. Officers were already in the area on an unrelated call for service and were at the scene quickly. The vehicle had previously been reported as stolen. The school was placed on lockdown and officers contained the school and adjoining property.

Assistance was requested through the San Luis Obispo County Sheriff’s Office for the use of a K9 to aid in the search for the outstanding suspect. Officers conducted the search of the school and the adjoining property without locating the suspect. During the investigation a suspect was identified in the theft of the vehicle.

“I am extremely impressed and proud of our Atascadero Police Dept and San Benito school today!! I was volunteering in my son’s classroom when an intruder entered the campus,” said Courtney Gailius-Bedell, a parent who was on campus during the lock down. “Atascadero police and San Benito staff handled the situation so professionally and methodical to ensure all of us were safe and on lockdown. The children in our class had no idea and simply continued as usual with alternative activities. I’m so grateful to have been here and seen the amazing work staff and police did!”

The lockdown was lifted before 2 p.m. Monday after police completed a sweep of the entire San Benito campus as an extra precaution. All schools and departments placed on lockdown resumed their regular schedules and students were released to the parents at the conclusion of the school day.

“AUSD would like to thank the students and staff members for responding quickly and effectively following emergency procedures,” the press release read.