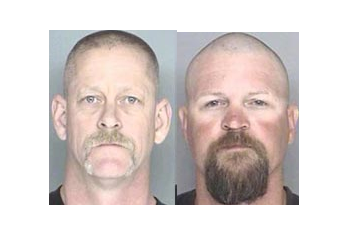 Noozhawk.com reports: Santa Barbara County sheriff’s deputies served search warrants Wednesday at the homes of five alleged motorcycle gang members who were arrested last month during a traffic stop in which semi-automatic handguns were discovered in their saddlebags.

The five suspects are alleged to be part of the San Luis Obispo County chapter of the outlaw Vagos Motorcycle Gang, according to Sheriff’s Department spokeswoman Kelly Hoover.

She said all were arrested on March 15 in Santa Barbara for possession of a concealed firearm and criminal street gang enhancement charges.

The search warrants were served at 6:30 a.m. at the suspects’ homes in Paso Robles, Cayucos and the Heritage Ranch area of Lake Nacimiento, according to Hoover.

“During the service of the search warrants, a shotgun and several pieces of suspected gang related evidence were found,” she said.

No additional arrests were made, and no new charges are pending as a result of the warrant services.