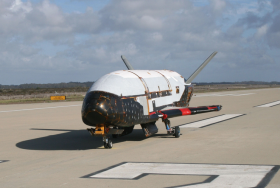 A spacecraft that’s been circling the earth for nearly two years is scheduled to land at Vandenberg Air Force Base this week, according to several reports on the mission.

The unmanned X-37B Orbital Test Vehicle, which is described as a secretive “reusable space plane,” launched in December 2012 from Cape Canaveral in Florida. It’s the the first vehicle since NASA’s Shuttle Orbiter with the ability to return experiments to Earth for further inspection and analysis, according to the Air Force. However, but it can stay in space for much longer than the pervious shuttles.

Vandenberg’s 30th Space Wing says extensive training has taken place in preparation for the upcoming landing. The team will monitor the craft as it leaves earth’s orbit and heads toward the Central Coast. It’s designed to land horizontally on a runway.

The exact landing time depends on technical considerations and weather conditions, according to Vandenberg.

See KCBX for the original report