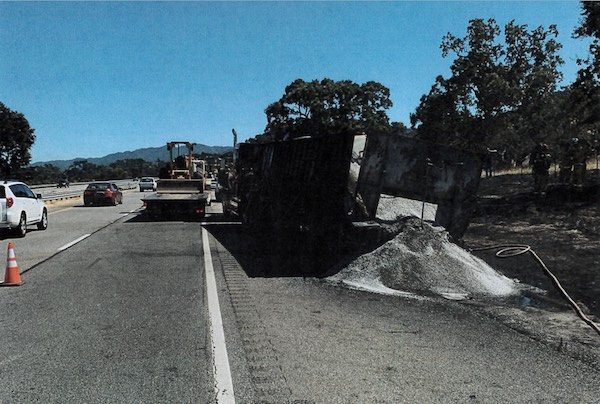 –California Highway Patrol has released additional details regarding the semi-truck that caught fire, igniting brush on the side of the highway and shutting down Southbound Highway 101 yesterday.

The driver of the truck was uninjured. He was identified as 24-year-old Jorge Luis Gonzalez of Bakersfield. He was hauling 79,000 pounds of rocks when a rear tire on the trailer went flat. He pulled the trailer over and noticed the tire smoking. He went to retrieve his fire extinguisher but by the time he returned to the burning tire a small fire had started and jumped to the shoulder. Gonzalez attempted to extinguish the blaze but was unsuccessful. Crews from multiple agencies responded.

The left lane of Southbound Highway 101 has been opened for through traffic. The right lane will remain closed for cleanup for approximately 5 hours, according to CHP. 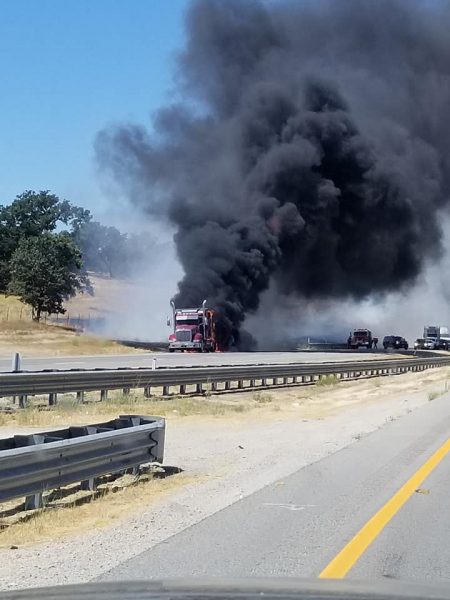 Southbound lanes of Highway 101 closed south of Atascadero
–A fire that ignited along Highway 101 Monday afternoon around near Atascadero was shutting down lanes of the highway. A semi truck reportedly caught fire and the flames spread to nearby vegetation.

The southbound lanes of Highway 101 are currently closed south of Atascadero. Drivers are being diverted off the highway at Santa Barbara Road and being advised to use El Camino Real as a detour. The northbound lanes remained open as of 2:15 p.m.