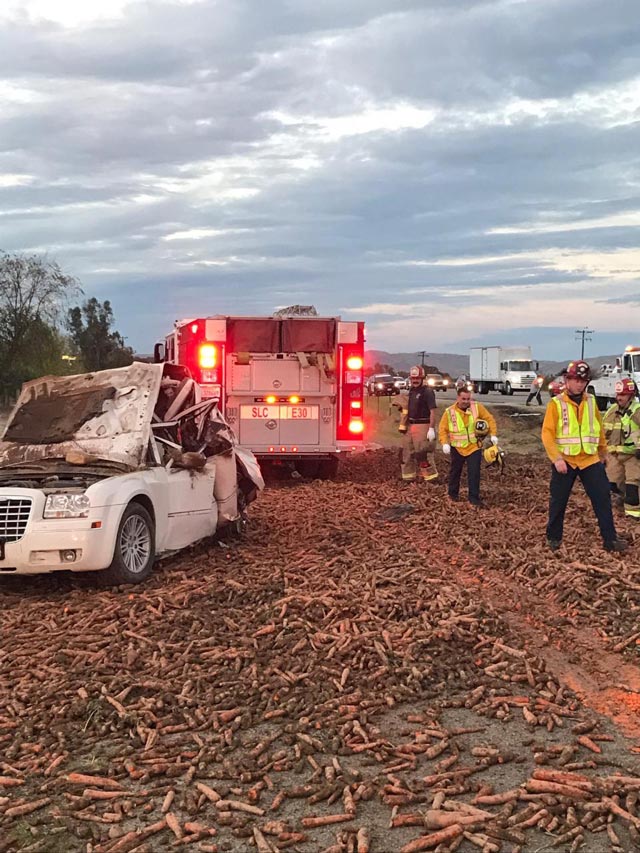 –The California Highway Patrol has released details regarding the collision that occurred Friday North of Paso Robles.

Jose Castro Medina, a 44-year-old from Bakersfield, was traveling southbound on US 101 north of Exline Road in the right line with a load of recently harvested carrots. Medina was traveling to Bakersfield where the carrots were to be processed. For unsubstantiated reasons he veerred to the right. As he turned abruptly one of the trailers he was towing whipped into the left lane and collided with Andrew Gutierrez, a 23-year-old Bakersfield resident driving a 2014 Honda. Medina then went onto the right shoulder and collided with a 2010 Chrysler with Bakersfield resident 47-year-old Jesus Garcia Santana inside. The Chrysler was parked on the right shoulder due to mechanical issues.

The impact pushed the Chrysler and Santana off the highway and onto Stockdale Road. Medina continued off the road and the contents of his second trailer overturned and spilled approximately 30,000 pounds of carrots.

Santana sustained major injuries in the collision. Gutierrez and Medina were unharmed.

The collision is currently under investigation and anyone with information is encouraged to call the Templeton CHP Office.

Around 4:45 p.m. a semi truck pulling a double set of trailers hit a white sedan in the intersection, according to a report.

At least one of the trailers overturned and the sedan that was hit was sent through a fence and into a field, the report said. Status on injuries was not available. Johnboy’s Towing removed the disabled vehicles.

No other information was available at press time. California Highway Patrol did not return a request for more information.