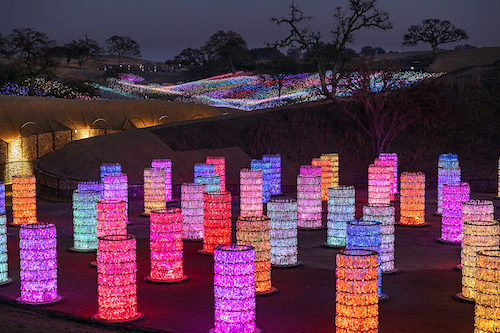 In addition to its current 15-acre Field of Light, guests will experience an entirely new, adjacent viewing area featuring Munro’s Light Towers, included with admission at no additional cost. The new exhibit was created to celebrate Paso Robles’ extensive wine country environs, featuring 69 towers composed of more than 17,000 wine bottles, illuminated with glowing optic fibers whose colors morph to a custom musical score. Sensorio’s expanded multi-acre walk-through exhibition, now titled Bruce Munro: Light at Sensorio, will be open to the public beginning April 15, 2021, at Sensorio, 4380 Highway 46 East, Paso Robles, California. The entire exhibition of Munro’s work has been extended through Sept. 30, 2021, with tickets on sale now. For tickets and information, the public may visit sensoriopaso.com.

This new installation expands Munro’s work at Sensorio. His 15-acre Field of Light at Sensorio, which has attracted some 200,000 visitors since its opening in 2019, is larger in size than any other Munro exhibition internationally and is Munro’s first US exhibit entirely powered by solar. It was singled out by The New York Times as #6 in its “52 Places to Go in 2020.” For this expanded exhibition, Sensorio enlisted Munro to create a vibrant new illuminated work that pays tribute to the 200+ wineries and vineyards that blanket Paso Robles’ rolling hills. Light Towers is inspired by Munro’s earlier work Water-Towers, originally created for and exhibited at the spectacular arcaded cloisters at Salisbury Cathedral in Wiltshire, England. The original spark came from a book Munro read at age 21, “The Gifts of Unknown Things” by Lyall Watson, in which a young girl possesses the magical gift of seeing sounds in color—a phenomenon known as Color Synesthesia. The book also described a natural pulse in the Earth’s upper atmosphere, resonating at a rate of 69 beats per day and forming a low note well below human powers of hearing. Munro’s immersive artwork featured towers that pulsed and changed color as a visual manifestation of the musical soundtrack emanating from within each column, which tunefully reflected the musical diversity of many nations.

For Light Towers at Sensorio, Munro has utilized wine bottles for the first time, as an homage to Paso Robles’ abundant vineyards. The 69 towers are made from 17,388 wine bottles—252 bottles per tower—rising some six feet high and illuminated in gently morphing color to visually represent the original composition “Rise and Shine,” composed by Orlando Gough and performed by a vocal ensemble. Extremely eco-friendly, all 69 towers together use approximately the same power as four 60-watt lightbulbs—or less than one-tenth of the power consumed by an electric kettle—and the entire exhibit is powered by solar.

The musical soundtrack for Light Towers is composed for a vocal ensemble and utilizes rubbed wine glasses, another homage to the vineyard setting of Paso Robles. The lyrics written by Orlando Gough are partly sung in English and partly in an invented language based on the word “sunshine” in many different languages. The music plots a day in the life of the sun — rise, shine, and set — and is based, like the towers themselves, on Lyall Watson’s notion of the “Earth Pulse.” The length of the piece corresponds to the length of one Earth Pulse (about 21 minutes), and both the tempo and pitches are dictated by the same concept. “That’s a very slow pulse of course, not at all musical—but sped up, it becomes a pulse you can detect, and sped up even more, it becomes a note you can hear,” explains Gough. “I’ve based the music on a pulse which is 1024 times as fast as the Earth Pulse—that’s about 50 beats per minute—and on a note that’s 65,536 times as fast – that’s about A flat below the bass clef. The entire piece is determined by Lyall Watson.” Munro commissioned Gough after discovering his work 20 years ago and enlisted him to create music for the original Water-Towers exhibit, as well as for this new installation. Reflecting the music of many nations, Munro says “I was drawn to Orlando’s music because he brings people from different cultures together to sing. An expression of uniting the world in these difficult times.”

The music lasts for one “Earth Pulse” before repeating, but Gough made adaptations so that it would not be predictable upon repetition. “Every time the music cycles, I have made variations, many based on improvisations made by the singers. These variations are often influenced by music from different parts of the world, so the overall effect of the music is very panoramic,” says Gough. Due to the pandemic, it was also not possible to record the music with all of the singers in one room—instead, each singer recorded their individual parts at home while singing to a backing track. Says Gough, “I really enjoyed the feeling of receiving all these sounds from faraway places and assembling them into a piece.” The singers of “Rise and Shine” are Sarah Gabriel, Sianed Jones, Rebecca Askew, Sian Croose, Melanie Pappenheim, Hazel Holder, Manickam Yogeswaran, Jeremy Avis, Ben McKee, Jonathan Williams, and Jonathan Baker. In the future, Munro hopes to offer special live performances of the music by 69 singers who are local to Paso Robles.

Says Sensorio Executive Director Paul Haught, “We look forward to once again welcoming guests to our exhibition, which has been closed since early December in accordance with state shelter-in-place mandates. We are reopening based on the assumption that it will be approved and safe to enjoy this outdoor exhibit in mid-April, but will be monitoring state and local restrictions, and reopening dates may be subject to change.” Haught notes that ticketholders will be invited to reschedule admission tickets without penalty in the event of any future shutdowns. In strict accordance with local public health requirements to mitigate the spread of COVID-19, Sensorio implemented safety precautions throughout the outdoor site when it reopened last May. Guests, who hold tickets for timed entry, are directed to follow a one-way path through the exhibition. Individual group size is limited (6 maximum), social distancing is monitored and enforced, and face mask coverings are required for all staff and guests. Sensorio will continue to offer food and beverages on-site in outdoor areas, including warm and cold drinks, wine/beer, snacks and meals. A VIP experience option is available, which includes exclusive access to a terrace that overlooks Field of Light, with an Airstream bar, private tables and fire pits, order-ahead food options, and other amenities.

Sensorio was created by locals Ken and Bobbi Hunter as a destination for entertainment, exploration, meditation, adventure, and delight, honoring the natural topography of the landscape and intended to offer a wide range of amusing, mystical, and kinetic experiences. Following the international success of Bruce Munro: Field of Light, Sensorio launches its second phase with the addition of Light Towers. An extension of the current exhibition, the entire site is included in the admission fee. Thousands flocked from around the world to Paso Robles to visit Bruce Munro: Field of Light at Sensorio, which opened in May 2019 and was proclaimed “the future of public wellness” (Forbes) and a “pilgrimage-worthy art escape” that is “meant to complement, never compete or detract, from the beauty of the landscape” (Travel + Leisure). Both exhibitions will continue through Sept. 30, 2021 at Sensorio. Other exhibitions and buildings are planned for future openings at the site.

London-born Bruce Munro is best known for large-scale light-based artworks inspired by his continuous study of natural light and his curiosity for shared human experiences. With a fine arts degree, early career training in the lighting design industry, and an inventive urge for reuse, Munro creates art that captures his responses to literature, music, science, and the world around him. His work has been commissioned by and displayed in special exhibitions in galleries, parks, grand estates, cathedrals, botanical gardens, and museums around the globe, including Longwood Gardens, PA; the Guggenheim Museum, NY; the Sharjah Museum of Art, UAE; Montalvo Arts Center, CA; Scottsdale Museum of Contemporary Art, AZ; Desert Botanical Garden, AZ; Jeju Light Art Festa, South Korea; the Colorado Springs Fine Arts Center, CO; Sotheby’s Beyond Limits at Chatsworth; Victoria & Albert Museum, London; Waddesdon Manor, the Rothschild Collection, Buckinghamshire; and Salisbury Cathedral, among others. Artworks by Munro are held in the permanent collections of museums and public art collections worldwide including the Ashmolean Museum of Art and Archeology, Oxford; Cheekwood Botanical Garden and Art Museum, TN; and Texas Tech University Public Art. More information is available at www.brucemunro.co.uk.