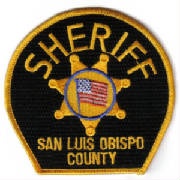 The Sheriff’s Task Force on Public Safety produced several public safety announcements that will help residents and businesses prepare for natural and manmade disasters on the Central Coast. The public safety PSAs include familiar faces of local mayors and some even use humor to illustrate that the county must be prepared for any type of disaster.

“Our goal is to make this county prepared for any type of disaster that could occur,” said Sheriff Ian Parkinson. “An earthquake, tsunami, flood, or fire could happen here on the Central Coast, and it’s important for everyone to be prepared for any disaster. This campaign helps us to get that message across.”

In addition to the PSAs, the Sheriff provided updates on increasing the funding for the 211 information line and San Luis Obispo County VOAD – Voluntary Organizations Active in Disaster – and increasing tsunami awareness along the coast. The Sheriff also announced the purchase of emergency trailers to be used before, during and after an actual disaster.

Led by the Sheriff’s Office, the Task Force on Public Safety was formed in January 2013 through a donation of $75,000 from PG&E to the Sheriff’s Advisory Foundation. The goal of the task force is to establish San Luis Obispo County as the most prepared county in the nation by raising public safety awareness and increasing collaboration between public officials, the county’s municipalities, disaster relief organizations and the local media.

“To deliver safe and reliable energy to California our employees continuously train and prepare to face any emergency that may arise,” said Greg Pruett, PG&E Senior Vice President. “We encourage our customers to do the same by learning what to do if a disaster strikes. The key to success starts at home, which is why this campaign encourages everyone to create a personal disaster kit and have an evacuation plan in place. Knowing how you will respond is the first step toward ensuring your safety and well- being.”