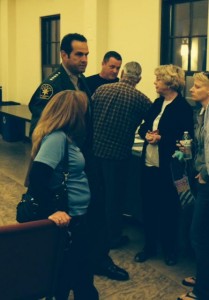 The sheriff talked about issues facing the community, particularly gang and drug activity. He said that gang members from King City and Salinas are moving south into San Luis Obispo County. He described how young people start with prescription opiates, but turn to heroin when they learn heroin is cheaper and more accessible.

District Attorney Dan Dow also spoke to the group. He talked about Proposition 47, which reduced many drug related felonies to misdemeanors. He discussed his misdemeanor diversion program, which went before the San Luis Obispo County Board of Supervisors Tuesday. It allows some first-time offenders to take classes in order to keep the offense off their record. In Orange County a similar program reduced recidivism among select offenders from 22 percent to six percent.

The town hall meeting in San Miguel Monday night is one in a series of similar meetings the sheriff is conducting around the county.