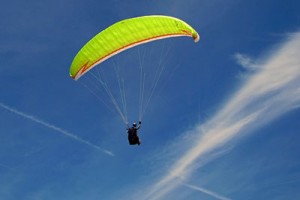 – At 1:05 p.m. on Friday, the San Luis Obispo County Sheriff’s Office received a 911 call from a citizen reporting a paragliding accident in an open field, east of Highway 1, 200 yards south of the Cal Fire Station located at 108 Chaney Ave in Cayucos. Fire and Medics responded, along with the California Highway Patrol.

A 55 year old male resident of San Luis Obispo was transported by ambulance to a local hospital emergency room. A short time later he was pronounced dead by hospital staff.

Witnesses indicated the victim was paragliding and experienced some type of difficulty and crash landed into an open field.

There is no indication of foul play, alcohol or drugs involved. An autopsy will be conducted to determine cause and manner of death and the Sheriff’s Coroner’s Office is continuing to investigate the incident. The man’s identity was not released pending notification of next of kin.