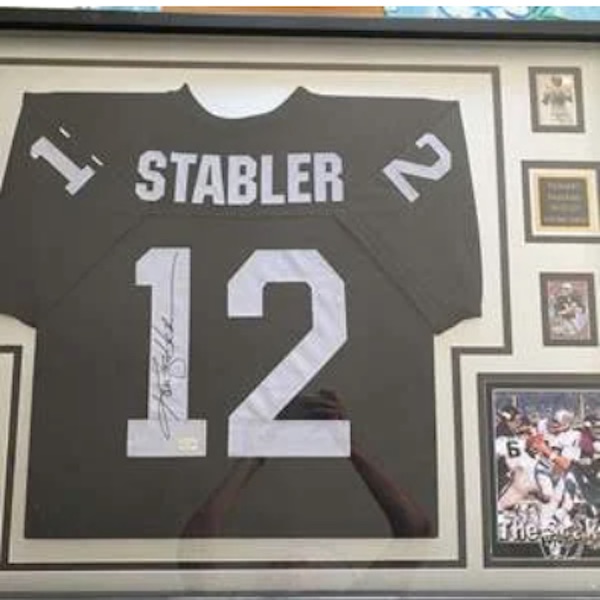 –SLOCAL Estate Auctions, LLC is auctioning a signed jersey of Raider’s sensation Ken Stabler, AKA “The Snake.” 100-percent of this auction will go to a scholarship from kristinsmart.org.

Kenneth Michael Stabler (Dec. 25, 1945 – July 8, 2015), nicknamed “Snake,” was an American professional football player who was a quarterback in the National Football League (NFL) for the Oakland Raiders (1970–1979), Houston Oilers (1980–1981) and New Orleans Saints (1982–1984). He played college football for the Alabama Crimson Tide. Stabler quarterbacked the Raiders to victory in Super Bowl XI, was the 1974 NFL Most Valuable Player and was selected as a quarterback for the NFL 1970’s All-Decade Team. Stabler was posthumously elected to the Pro Football Hall of Fame in 2016.

The Kristin Smart Scholarship celebrates her life, hopes, dreams, and ambitions – by empowering other young women to pursue their ambitions in Kristin’s name. Thank you for your support, there is no greater acknowledgment of Kristin’s life than allowing us to give back in her name. “We’re looking to raise $1000 for a college scholarship” states Doug Little, Owner of SLOCAL Estate Auctions, LLC. “My wife, Jennifer is a Cal Poly Alumni and we’re glad to help out a future college student by not taking a commission on this item.