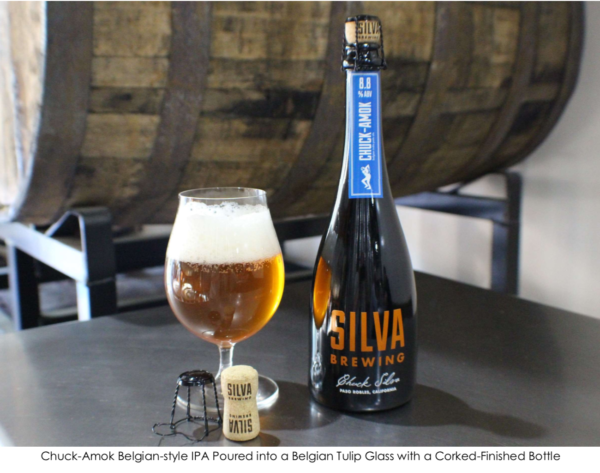 —On Friday, May 25, Silva Brewing will add to its ever-expanding repertoire of hand-crafted beers with a new offering: Chuck-Amok Belgian-style IPA. This will be Brewmaster Chuck Silva’s second foray into this modern-day beer style, which has been around just over a decade. Chuck crafted America’s first Belgian-style IPA in 2007, inventing “Le Freak” while working as Brewmaster for Green Flash Brewing. Le Freak went on to win numerous brewing awards at the Brussels Beer Challenge, World Beer Cup and, most recently, a gold medal at the 2015 Great American Beer Festival.

“In my head and in my heart, I knew we would eventually brew this beer even if it wasn’t on Chuck’s list,” says Silva Brewing co-founder and head of operations Mary Jo Silva. “The spark to go forward with this beer came when local patron Neil Cassidy of DAOU Vineyards came in with a story about how his friend has a husband named Chuck, and when he’s running amok she calls him ‘Chuck-Amok!’ Boom! That perfectly depicts my husband running around the brewery getting beer made. We immediately embraced the sentiment and Chuck set out to create a new version of the style he is so well known for.”

The style profile of Belgian IPA is complex with pronounced fruitiness and spiciness derived from Belgian yeast with a moderate to high level of fruity American-grown hops. The color is usually on the lighter side like a Belgian Tripel or American Imperial IPA, and it’s always well attenuated for a zesty finish.

Chuck-Amok is fermented with traditional Monastery Ale Yeast for fruity and spicy contributions, finished with California Ale Yeast for a dry crispness weighing at 8.8%ABV. Chuck’s heavy-handed use of Yakima Valley hops brings forward additional fruity traits of melon and citrus, along with lively carbonation from natural re-fermentation for an overall explosion of zesty flavors.