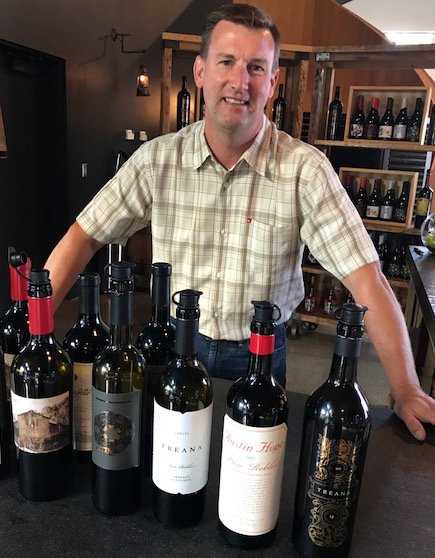 Is Paso Robles Cab country or a Rhône zone?

When vintner Daniel Daou and his brother Georges arrived in Paso in 2007, they set out to raise the bar and profile of cabernet sauvignon to where the Paso grape is now gaining much respect and garnering high points from trade journals.

“When I came to Paso, I saw the potential of growing world-class Bordeaux varieties,” said Daou, co-proprietor of Daou Vineyards & Winery. “A lot of people were afraid of making high-end cabs; they didn’t want to compete with Napa. We’ve come along way since 2012.” 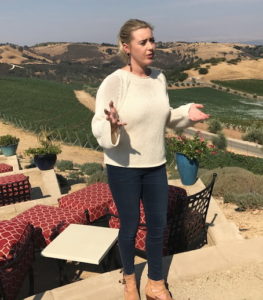 That was the year when Daou’s passion for Paso cabernet sauvignon led to the formation of a grassroots organization known as the Paso Robles CAB (Cabernet Sauvignon and Bordeaux) Collective. He gathered support from owners of wineries such as Eberle, J. Lohr, Adelaida, Justin, Vina Robles and Chateau Margene to found an organization that aimed to educate the trade and consumers on the quality of these wines produced in Paso Robles.

This week the Paso Robles CAB Collective (PRCC) hosted its annual CAB Camp, a three-day immersive experience for members of the media who traveled from across the country to savor Paso’s cabernet sauvignon and Bordeaux-style wines.

Since its inception, the 35-member strong PRCC has designed a program of hosting two camps annually, one for trade and industry and the other for wine journalists.

The activities planned over three days included visits to vineyards and to Paso’s different appellations. I chose to join the group for three afternoon sessions of varietal wine tastings that were held at Hope Family Winery, Daou Vineyards & Winery and Vina Robles Vineyards & Winery. 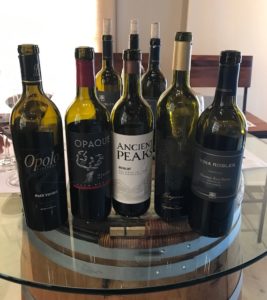 A flight of FAB 5 tasting at Vina Robles Vineyards & Winery 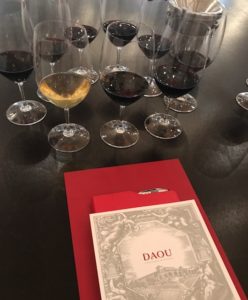 Tasting of red Bordeaux blends kicked off with a Daou chardonnay

The second tasting held at Daou Vineyards & Winery’s focused on red Bordeaux-style blends representing six Paso wineries. Katherine Daou (daughter of Daniel Daou), the winery’s Trade Ambassador and Sustainability Liaison gave us a tour of the mountaintop estate, noting that its 2,200 feet elevation makes Daou the highest winery on Central Coast. The 120-acre vineyard is planted in the style of French vineyards and surrounded by some 3,000 olive trees.

While conducting the tasting, her father touched on his favorite subject — the high phenolics in Paso cabernet sauvignon. His passion runs so deep that he spends hours conducting comparative measuring of phenolic levels of cabernet sauvignon from other regions such as Napa and Bordeaux.

“We have a rare phenomenon of phenolics here, higher than any other place,” said Daou, joined by Maeve Pesquera, the winery’s senior vice-president.

Daou filled us in on Adelaida district’s temperate climate, his farming practice (dry farming gives complex flavors) and the property’s soil: clay with limestone subsoil. “It’s similar to Bordeaux’s Right Bank,” he said. “You get to taste the minerality; it’s sort of Old World.” 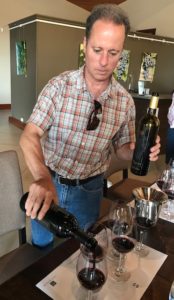 The tasting commenced with savoring three Daou wines. The 2015 chardonnay filled with a rich mouthfeel and a trace of oak is produced from sourced fruit as the Daou estate chardonnay is not yet ready for production. Next up, the 2015 Reserve Cabernet Sauvignon was rich with blackberry and cassis notes and layered with silky tannins followed by the intense and lush 2014 Estate Cabernet Sauvignon that was aged for 20 months in new French oak barrels.

The complexity and age-ability of Paso’s Bordeaux style blends showed brilliantly in the six wines that we sipped. The 2013 Cuvee Pau, from J. Lohr was a cellar-worthy cabernet sauvignon blend dense with ripe fruit and San Simeon’s 2013 Stormwatch was a typical Bordeaux-style blend of all five varieties produced in small lots from steep hillside vineyards.

Niner Wine Estate’s 2014 inky-black Fog Catcher whispered hints of chocolate, vanilla and cherry; Pomar Junction’s 2014 Cab Forward showed nuanced licorice and plum notes; and Castoro Cellars’ 2013 Due Mila Diece was gilded with layers of violets and cinnamon. As a finishing touch, Daou’s elegant 2014 Soul of a Lion, reflected the expression of Paso’s hillside garrigue , a riot of flavors that range from dry brush to aromas of plums and creme de cassis.

The final tasting held at Vina Robles spotlighted the five Bordeaux grape varieties — cabernet sauvignon, malbec, merlot, cabernet franc and petit verdot. The tasting conducted by winemaker Kevin Willenborg kicked off with Vina Robles wines produced from its Huerhuero vineyards that run through the districts of Geneseo, and El Pomar, and vineyards planted in Creston Valley. The lineup ranged from the grapefruit-tinged 2016 sauvignon blanc to the garnet-hued 2014 cabernet sauvignon, the full-bodied 2013 Suendero and the inky black 2013 petit verdot, a silky wine singing with notes of licorice.

We ended the tasting with Vina Robles’ 2013 Mountain Reserve cabernet sauvignon from the hilly Adelaida Springs Ranch. The dark garnet wine gilded with blue fruits and refined tannins was a pure expression of Paso’s rocky calcareous soils. You can easily drink it now but it begs for cellaring.

“Paso can produce wines with soft tannins and fruit forward wines that are approachable and age-worthy,” Willenborg informed the group of visiting journalists who no doubt, will turn out to be good ambassadors of our region.