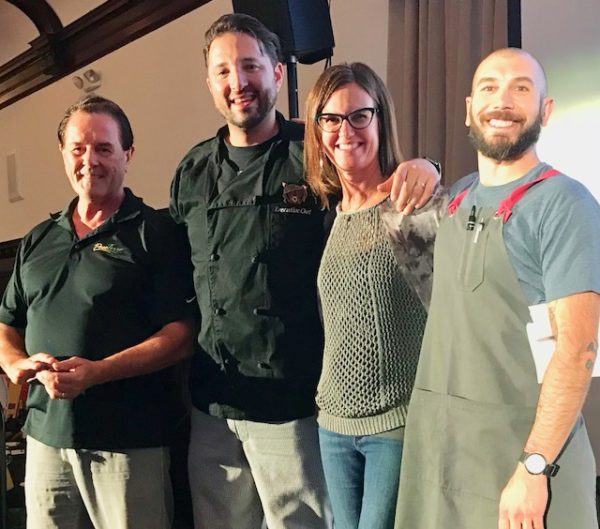 A celebration of food and wine for a good cause

-The 8th Annual Cioppino & Vino fundraiser held at the Paso Robles Inn ballroom on Nov. 12th raised $32,000 benefitting the Children’s Museum of Paso Robles. The event drew a crowd of 150 people with 12 wineries pouring their finest and six competing chefs ladling out the traditional cioppino.

“We are celebrating our tenth anniversary this month,” said Jennifer Smith, executive director of the Children’s Museum at the Paso Robles Volunteer Firehouse. The mission of this non-profit organization is to maintain an interactive educational facility for the community’s families, children and educators while showcasing Paso’s volunteer firefighters.

“Ninety percent of the funds raised go to the museum,” Smith added. Over the past seven years, the Cioppino & Vino fundraiser has grossed between $35,000 and $40,000 each year.

This was my first attendance at this event where there is a lot going on. Besides food and wine, there was a silent auction of 54 wine and lifestyle packages, a live auction of 15 lots and, of course, the cioppino competition. The participating chefs were among Paso’s usual suspects, each with a slightly different take on the Italian-American dish that originated in San Francisco. 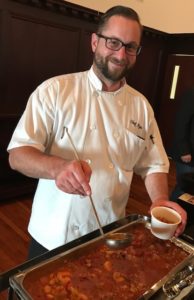 Are you competing with each other, I wondered? “It’s a friendly rivalry,” Cristina answered with a smile. “It’s all in the family.”

Across the room another family competition was in progress. The Beckett brothers Martin and Chris — chef Martin mans the kitchen at Pappy McGregor’s — dished out bowls of a smoky stew that Martin calls Fog City, named for its San Francisco birthplace. Smoked halibut, crab and lobster went into this version that the chef suggested pairing with syrah or zinfandel.

Chef Chris Beckett who helms the Fish Gaucho restaurant’s kitchen, was absent but sent his assistant Lars Hovind with a large pot of peppery Cioppino de Gaucho. The stew of mahi-mahi, scallops and halibut was topped with smoked octopus and garnished with arugula micro greens.

Ryan Swarthout, executive chef at Paso Robles Inn’s Steakhouse, cooked up the traditional cioppino adding half a bottle of chardonnay to the ten gallon pot of cioppino steaming with chunks of cod, clams and shrimp cooked with fire-roasted tomatoes and fennel.

Justin Vineyards & Winery chef Tim Barakat also created a traditional version but added a twist by charring his ingredients before assembling them with a little extra dose of fennel. Justin’s winemaker Scott Shirley was on hand to suggest pairing it with the 2014 tempranillo. “By itself it’s a little dry on the finish,’ he said of the wine, “but goes well with this cioppino.” 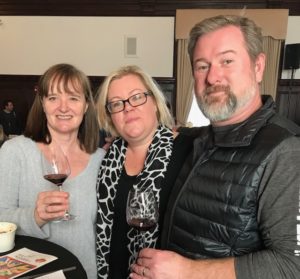 Lisa Pretty and Scott Shirley with his wife Margaret

Chef Barakat nabbed the top award for both the people’s choice and the judges’ award as decided by winemaker Lisa Pretty, Pepper Daniels and Cindy Sassman. For the second prize, chef Averseng received the people’s choice while the judges prize resulted in a tie between Martin Beckett and Averseng.

As for the wines, there were more red than white. The consensus was that while white wines do pair well with seafood, red wine lends itself very well to the tomato-based cioppino. At Tolo wine, the pourer suggested the grenache, syrah mourvedre blend for chef Swarthout’s cioppino and the sangiovese and zinfandel blend for chef Averseng’s squid ink version. Representing Oso Libre winery Jeffrey Freeland offered the rosé of mourvedre, which goes well with cioppino in general.

Stu Goldman, owner of Frolicking Frog, suggested his 2013 viognier “to sooth your tongue after a hot cioppino.” He also suggested to match the spicy effect of the dish with Jeremiahwasa, a bold red non-vintage blend of syrah, cabernet sauvignon and petite sirah. 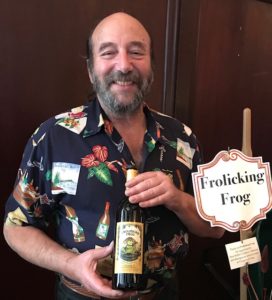 Le Vigne winery’s cheese lady Zina Miakinkova selected wines that would pair well with cioppino and a selection of three cheeses. The wine selection ranged from light to bold that included sauvignon blanc, sangiovese and a Super Tuscan blend of sangiovese, cabernet franc and cabernet sauvignon.

Author and winemaker Pretty, who crafts her wine under the P.S. Cellars label, brought the barbera along with a grenache/syrah blend, wines she considered a good match with cioppino. “The other two are bigger and bolder,” she commented on the cabernet sauvignon and a Bordaux blend wines at her station. “It’s not for pairing, but people like big ones.”

The lively auctioneer Dr. James Brescia raised excitement with lots that ranged from vacation packages to airplane rides and a wagon full of wine.
But it was the private dinner for eight with chef Andre Averseng that piqued the guests’ interest.

“This will be your tax dollar working for you,” mused the auctioneer as the dinner will be served by Mayor Steve Martin and Councilmen John Hamon and Steve Gregory. “Remember it’s the government working here and it’s for the kids.” The lot went for a cool $2,000.

From the enthusiasm of the crowd it was clear the museum and its activities are popular with the locals. Since opening in 2007, the museum has welcomed over 200,000 visitors including 16,000 elementary students, who participate in educational programs provided by the museum and its dedicated local sponsors.