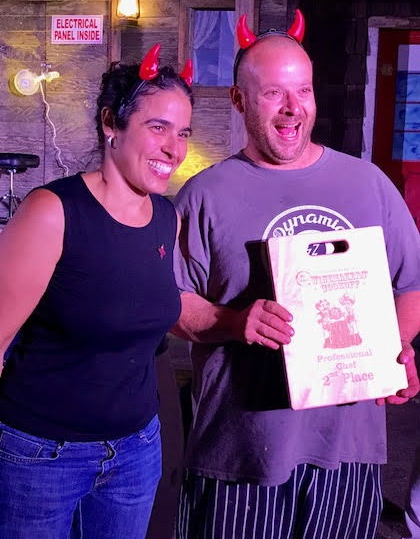 –The Winemakers’ CookOff rates among my favorite Paso food and wine events. So I was honored to be invited by Gary Eberle, the event’s mastermind, to join the judging panel.

The 19th Annual CookOff presented by Paso Robles Rotary was held in its usual venue, the event center. Instead of cruising around the various booths and food stations as in previous years, I was anchored in the judge’s tent with fellow judges Robert Whitley, Sara Schneider, William Bloxsom-Carter and Michael Cervin.

This year’s chef/winery winners came up as follows: In the professional category, there was a tie between chef Johnny Jantz of Boccabella Farms who teamed up with Lefondusac winery and chef Kevin Archambeault of Derby Wine Estates for the number one spot followed by chef Nicola Allegretta of Mistura restaurant who partnered with Diablo Paso winery.

Armed with forks and napkins, we were ready for the onslaught of sliders, tacos, ribs, and skewers – a daunting albeit a delicious task of savoring some 24 dishes, one bite at a time.

The food parade began as a team of volunteers served the dishes prepared by local professional and non-professional chefs each one representing a winery. However, not all the dishes that were served to us came with a wine pairing.

We were handed the competition list detailing the 24 dishes that did not reveal the name of the chef. However, each dish was presented to us by the chef and/or the winemaker, so we clearly got to know who prepared that dish.

The titles were creative and presentation inventive. There was San Tropez chicken – a salad served on a mini rubber inflatable float and Neil Roberts’ Jaw-some Shark Bites – cod (not shark) kebabs covered with sriracha mayo, served with the 2012 Clavo grenache blanc. The waffle on a stick called Little Piggy Ate Chicken “n” Waffles was another innovative way to savor this popular dish that was dressed with bacon and maple syrup.
Created by Broken Earth winery’s Chris Cameron, the Cut-Throat Jerk Shrimp skewers served on a bed of confetti rice arrived on a tray dramatically decorated with skulls and a dagger. 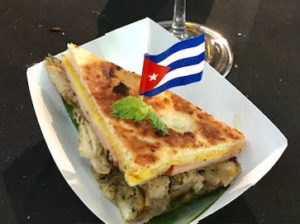 The meat lover’s barbecue prepared by Scotty’s BBQ & Catering had a ‘beachy’ theme going on. It was paired with Justin Vineyards & Winery’s 2016 rosé that was poured by winemaker Scott Shirley. “This is cabernet sauvignon dressed for a pool party instead of a formal party,” said Shirley passing out flip-flops bearing the Justin logo. “We are unabashed producers of cabernet and Bordeaux wines but we also make a rosé of cabernet,” he said of the wine that is available only at the tasting room. Crafted in a pale Provencal style, the wine had a wonderful crisp acidity, surprisingly a good match with the tri-tip and pulled pork.

There were a couple of New Orleans-themed dishes: Greg Barr’s grilled Cajun shrimp paired with the 2013 Barr Estate viognier and a smoked brisket Jambalaya served with a 2013 Dane Head, a blend of malbec, petit sirah and cabernet sauvignon. 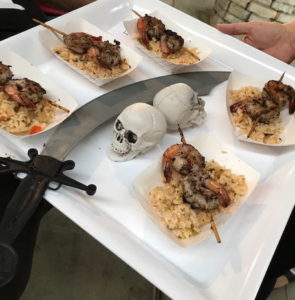 Offering colorful Mardi Gras beads to the judges, Gary and Marcy Eberle presented their famous gumbo creation of Laissez Lez Bons Temps Rouler (let the good times roll). “It’s my gringo gumbo recipe,” Gary admitted as he passed out mini bottles of tabasco for the judges to spike up the dish that combined slow smoked chicken and grilled Andouille sausage with roasted okra. “I made the roux myself,” Gary added with great pride.

Chef Jason Joyce’s Chicago style grilled sweet Italian sausage was quite authentic. Served on a French roll and topped with onions and sports peppers (a relish from Chicago), the dish married well with the 2015 Calcareous blend of zinfandel, syrah and merlot.

From Derby Wine Estates, chef Kevin Archambeault’s slow smoked prime brisket was just that. “I started at 4 a.m. this morning,” he revealed of the melt in your mouth meat that smoked for 12 hours over oak and hickory wood. Topped with smoky tomato barbecue sauce and served on classic rainbow white bread, this was a delight paired with Derby’s 2012 Project Espana Red, a bold blend of tempranillo, graciano, grenache and carignane. The dish was clearly a favorite with the panel. 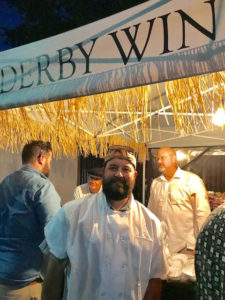 Not your mother’s grilled cheese and tomato soup was crafted by chef Johnny Jantz of Bocabella Farms. The title said it all, not many mothers are up to whipping up chilled heirloom tomato and basil bisque and flavor it with herb-infused Bocabella extra virgin olive oil. And the sandwich? Oozing to perfection with a delightful crunch, the La Migliore French baguette sandwich melded domestic and imported Brie cheeses with slow smoked pulled pork lightly tossed in a tangy barbecue sauce: another favorite with the judges.

Mistura, the Peruvian restaurant’s chef Nicola Allegretta once again created a mouth watering seafood dish of sustainable grilled Ora King salmon (from Canada) that was marinated in Aji Panca and served with Arroz Chaufa and Rocoto Creme. The dish was well paired with the 2016 Diablo Paso albarino.

The whole hog Cubano sandwich was another hit with the judges. The slow roasted meat with classic mojo flavors was served on a foccacia bread and paired with 2016 Pear Valley grenache.

By the time we got to dish number 20, it wasn’t so much of palate fatigue with the judges as it was the full stomach syndrome. We were given two hours to go through the lineup, so for me, the tasting and judging seemed a bit rushed.

But over all, it was a delightful experience for me to see the creativity of the chefs and the time and effort pooled in by each team.