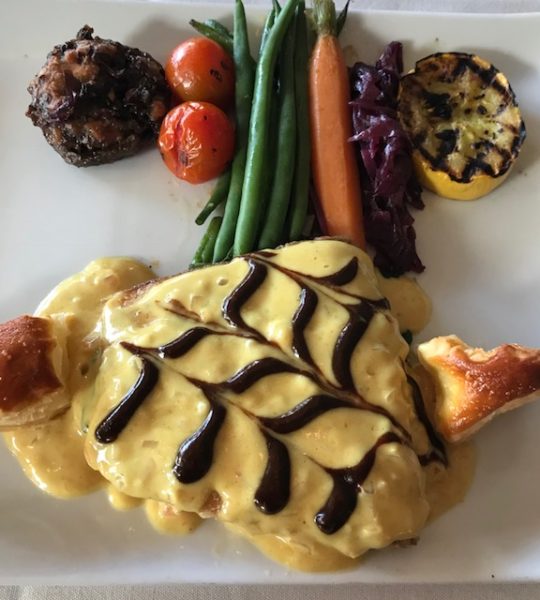 -In this second part of my column on Paso chefs, two more culinary masters are featured.Newcomer Kurt Metzger at Thomas Hill Organics, who is poised to take the local fine dining scene up a notch and Paso veteran, chef Andre Averseng.

Chef Kurt Metzger is delighted to be in Paso. In his new position as corporate chef, he oversees Thomas Hill Organics’ Paso Robles and San Luis Obispo locations as well as the restaurant’s catering events. (The week we met, he was in the midst of catering Rihanna’s video shoot at the Dunes In Pismo Beach).

One of the first tasks the chef accomplished on arrival last summer was to establish relationships with farmers, foragers and fishmongers.

”I took time out to visit every farmer and vineyard,” he emphasized. Among his purveyors are Loo Loo, Robin Song, Peacock, Pepper Creek and Brandon farms.

Metzger is a throwback at heart. “We’ve lost the old days of Sunday family dinners,” he said with fondness. His fall/winter menu reflects just that — hearty dishes that one might enjoy during the holidays with family. 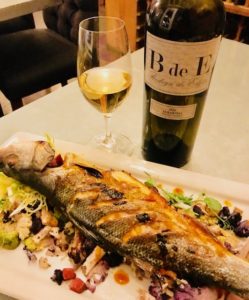 The chef and his culinary team are making good use of the Paso restaurant’s outdoor wood oven, roasting proteins such as chicken, Bulgogi-style short ribs or whole branzino fish imported from Greece.

“The local halibut is not fatty enough for the wood oven,” Metzger explained in defending one of his few non-locally sourced dishes. Vegetables such as cauliflower and honeynut squash — that Metzger calls the Mini-Me of butternut squash —also get the wood oven treatment and come out smoky and delicious.

The minimalist chef likes to keep it simple as he heads into the fall menu. His culinary philosophy borders on “no more than seven ingredients in a dish.”

The plated food might look complicated but actually is crafted with few ingredients: the poached pear salad is dressed with blue cheese and pistachios sprinkled with crispy quinoa; the Hamachi resting on spicy aji amarillo sauce is perfect with a sip of bubbles; and a simple butter lettuce salad is an explosion of flavors in one bite – the saltiness of castelvetrano olives is layered with the sweetness of apple honey dressing and then there’s the crunch of fresh lettuce.

Other appetizers on the new menu include burrata salad with apple, tuna tartare, scallops with orange sauce and New Orleans-style garlic oysters. Perennial favorites such as lentil tacos stay on the menu. 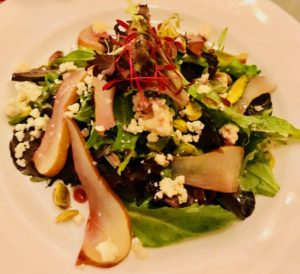 A whole branzino gets a hearty touch stuffed with speck and accompanied by roasted cauliflower and broccoli, and is a surprisingly good match with Bodega de Edgar’s 2015 albariño. The smoky and moist roast chicken comes atop garlic mashed potatoes and the Korean-spiced short ribs, which are roasted then braised for 14 hours, deliciously melt in your mouth. A sip of Levo syrah adds a sensory experience to this dish. Other dinner mains range from Thai chili salmon and charred New York steak to Chilean style pork shank.

The cheese platter is impressive with a line-up of local and imported varieties including the Burgundian Époisses, Lyonnaise Brebirousse D’Argental and Cabra Romero from Murcia, Spain.

Metzger is clearly drawn to California wine country. He did consulting in Napa Valley but decided to settle on the Paso region. Within a week of his arrival at the restaurant people were calling out his name on the street and neighboring restaurants offered help, he reflected. “It’s very heart warming.”

Chef Andre Averseng has been a popular Paso fixture for many years. The chef is sought after for his catering, cooking classes and seafood-focused, French-flecked Paso Terra restaurant. Originally from Avignon, France, Andre and his wife Cristina arrived in Paso Robles by way of South Pasadena and established their Dining with Andre catering that evolved into Paso Terra. 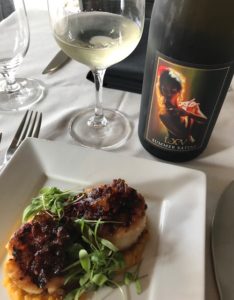 Averseng’s classical French training is accented by modern techniques with an eye for healthy cooking. His soups, for example, are not made with cream, which is served on the side upon request. He is inspired by the local seafood bounty. “I don’t put focus on meat,” adds the health-conscious chef. But he does add beef filet to his menu. “People order that.”

Averseng focuses on seasonality. From summer’s refreshing gazpachos, crudos and ceviches he shifts to warm dishes in the fall. The scallops, for example, get a hearty fall spin, served on a pool of butternut sqaush puree, topped with crunchy bacon and onion relish sweetened with maple syrup, perfectly paired with the 2016 LXV Satine viognier.

The Indian summer pumpkin soup is finished with a splash of bourbon. “It’s an east coast kind of a dish,” Averseng asserts. The flavorful vegan tortilla soup is served sans cream.

Each time I dine at PasoTerra, I find something new in the fish lineup. This time Averseng introduced the Panamanian Cobia fish to me, a cross between sea bass and swordfish. The delightful firm white fish is a magical delight in every bite served with creamy aoili and a sweet and tangy black garlic vinaigrette. The Cobia is accompanied by Averseng’s signature assemblage of grilled vegetables.

Black food is now trending and the chef is right on top of it. Besides black garlic, the menu lists black rice risotto with shrimp and prosciutto. Averseng recently gave a squid ink spin to his award winning black seafood stew at the Cioppino & Vino fundraiser.

To his crowd pleasers such as sand dabs, ora king salmon, macadamia nut crusted halibut and sautéed sea scallops, the chef has added a spiced- Moroccan style fish. For the meat eaters, the menu shows lamb in bourride and beef filet mignon in morrel sauce. The soup selection reflects a fall touch with rich lobster bisque and hearty smoked salmon chowder with potato and bacon.

As for dessert, don’t leave the restaurant without it. An expert baker, Averseng creates specials on a daily basis, with chocolate hazelnut torte and flourless chocolate cake being his signature sweets.

(This is part two of the two-part story)