Paso Robles News|Friday, February 28, 2020
You are here: Home » Entertainment » Sir Ringo Starr and his All Starr Band to play at Vina Robles 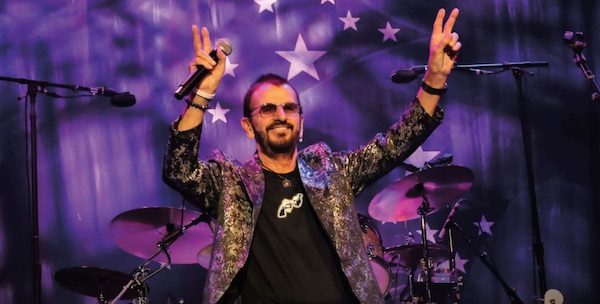 –Nederlander Concerts has announced that Ringo Starr and His All Starr Band, featuring Steve Lukather, Colin Hay, Gregg Rolie, Warren Ham, Gregg Bissonette and the return of All Starr alum Hamish Stuart will make a stop at the Vina Robles Amphitheatre in Paso Robles on Saturday, Aug. 31.

2019 marks the 30th Anniversary of Ringo and His All Starr Band whose first concert tour began in 1989.

Last year, Ringo released his third book, Another Day In The Life, in limited edition with Genesis Publications, while the hard cover will available in wide release this fall. Following in the series that began with the sell-out success of Postcards From The Boys (2003) and Photograph (2013), this book includes previously unpublished photographs, captioned with Ringo’s observations and anecdotes. Reflecting his love of music, travel and nature, Another Day In The Life shows us the world as seen through Ringo’s eyes. From Los Angeles to Tokyo and everywhere in between, many of Ringo’s observational images celebrate the quirkiness of life.

In a fitting comment taken from his upcoming book, Ringo wrote, “It’s about changing one second so that people think peace and love, it’s something I learned from the Maharishi. If you do something for good, the trees, the grass, the whole planet will support you – you’re always loved. I live in that world.”

Tickets available at Ticketmaster.com or charge by phone at 800-745-3000. All dates, acts and ticket prices subject to change without notice. A service charge is added to each ticket price. For more information, please visit www.VinaRoblesAmphitheatre.com.