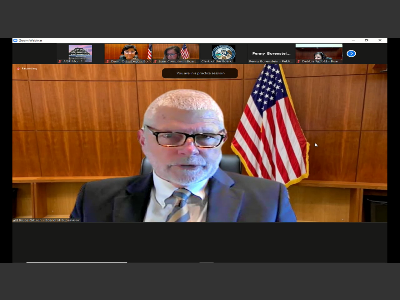 – The agenda for Tuesday’s San Luis Obispo County Board of Supervisors meeting listed Bruce Gibson as the new chairperson of the board. Many considered his ascension to the seat to be an automatic change, dictated by board protocol approved in 2019. The first item on the consent agenda stipulated, “Reorganization of the County Board of Supervisors: Election of Chairperson and Vice-Chairperson for the 2022 term. All Districts.”

Despite the automatic nature of the reorganization, Supervisor Debbie Arnold raised questions about selecting Supervisor Bruce Gibson to be the chairperson for 2022. The standard rotation was interrupted in April 2020 after Supervisor Adam Hill stepped aside from the position, saying he needed time to recover from a health issue. Lynn Compton then became chairperson earlier than her scheduled 2021 service. Hill died in August 2020 by suicide.

On Tuesday, Supervisor Arnold pulled the item from the consent agenda and the supervisors discussed it later in the meeting. Arnold told the board, “I, myself, have been disappointed by the treatment of some of the public commenters and the disruption of our board process. I would prefer allowing discussion on this item to ensure election of a chair who would be respectful of the public, respectful of each other and someone who would foster civil discourse at our board meetings. So, to that end, I would really like this board to consider nominating Supervisor Peschong as board chair for the 2022 term.”

Several emails from the public corroborated Supervisor Arnold’s allegations. Mike Stewart wrote, “He is demeaning, rude and disrespectful of not only members of the Board of Supervisors, but to his constituents in the county.” Later in the meeting, the board took a vote on Gibson’s rotation to chair the SLO County Board of Supervisors.