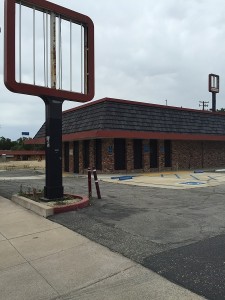 Photo by Paula McCambridge
SLO Donut Company is in talks to move into the former Jack in the Box building on El Camino Real in Atascadero.

Building permit app to be filed in July

Five years after the windows were boarded, the Atascadero Jack in the Box building on El Camino Real may soon house SLO Donut Company.

The structure, which sits in the heart of the city’s downtown district at 6320 El Camino Real, shut down its operation on Dec. 30, 2010, just six months after relocating to the south end of town. Jack in the Box’s lease remained active, however, and has several years left on it even now. Subletting is allowable with the approval of both Jack in the Box as the lease-holder and the parcel owner, James Provenzano of San Jose.

“As long as they abide by the conditions of the lease, they have the right to sublet,” Provenzano said. “They can have a restaurant or do something else. As long as it’s clean and dependable, I’ll approve it.”

Peabody and PLUM Commercial Broker Mike Sherer is representing his clients at SLO Donut and said it’s looking promising that the shop will open but that nothing has yet been finalized.

“Jack in the Box has been cooperative; they want to make sure anyone in that space succeeds and can continue long-term,” Sherer said. “Negotiations are going well, but it’s too early to say anything has been finalized.”

A staff member at SLO Donut confirmed that their store is looking to expand into Atascadero with the hope of opening by the end of the summer.

A building permit is expected to be filed with the city of Atascadero in July, and city planner Alfredo Castillo said he and other city staff have been to the site for pre-inspections.

“In this instance, we’re using our economic development tools to support bringing business to Atascadero,” Castillo said. “That includes a free onsite visit, at no cost to the potential business. We go out, walk the site and give potential business owners a heads-up to anything that may be a concern. What we’re doing here is trying to analyze and red-flag any issues up front.”

Castillo said some upgrades were needed in the kitchen and bathroom to bring them in compliance with the American Disabilities Act but said that there was nothing huge to address.

The SLO Donut Company is a family-friendly business that creates unique donuts — like their Captain Crunch cake donut — and events surrounding donut consumption, such as their donut-eating contests.

“I’m super excited about this business,” Castillo said. “My wife actually has a Donut Friday there with our kids. This business has done an excellent job in SLO and will knock it out of the park. When everything is finalized, we’ll bring out the bells and whistles.”