Three decades after its inception, the downtown San Luis Obispo Thursday Night Farmers Market is getting a new look. Over the next six months, the San Luis Obispo Downtown Association will unveil several improvements that hope to build on the market’s success, including better access and infrastructure, technology that puts shoppers in real-time contact with farmers and their produce, and augmented hands-on educational opportunities for people of all ages. 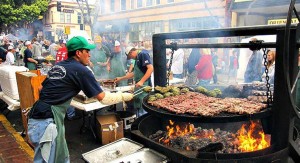 To celebrate the refresh, on Thursday, April 9 from 6 to 9 p.m., the farmers market is kicking-off with a free, all-city street party that starts with the unveiling of the new farm-stand and market information booth. At 6 p.m., Councilwoman Carlyn Christianson will be on hand to christen the farm-stand with seasonal produce from the market at Chorro and Higuera Streets, offering drawings and giveaways of new downtown SLO farmers market merchandise like trucker hats and tees.

Then at 6:30 p.m. the market’s mascot, Downtown Brown, will lead the way to the first of the downtown San Luis Obispo farmers market “Fresh Picked” concert series presented by the San Luis Obispo Collection featuring The Damon Castillo Band, at the Harvest Stage located in the Union Bank parking lot.

“After an internal review, we realized that there were a few things that we could do to really take our market to the next level,” said Downtown Association Executive Director, Dominic Tartaglia, whose organization oversees the farmers market. “After thirty-two years holding this event we had to dig deep to see what those improvements were but, ultimately, we developed a strategy to make the user experience more pleasant and the vendors’ experience more profitable. We want this to be a market that locals continue to attend each week and be proud of when they bring guests with them.”

Established to provide the community with a positive gathering space that also supports local businesses, “Thursday Night Promotions” (as it is officially named) began in 1983 when the San Luis Obispo Downtown Association closed six blocks of Higuera Street from 6 to 9 p.m. to offer entertainment, special activities, food and shopping every Thursday night. Not long after, farmers were invited to sell their harvest and the event soon became what it is today.

Since then, the market has developed into a weekly, year-round street fair that is consistently named among the nation’s best, complete with top-shelf entertainment,abundant local produce, family activities, delectable prepared foods, value-added products, and a bicycle valet.

“Higuera Street is truly this community’s ‘living room,’” said Pierre Rademaker, longtime resident and owner of Rademaker Design, “and Thursday night has become our way of sharing it with family, friends and visitors.”

“Every week, I look forward to farmers,” said Amber Bixler, owner of Elevenses Mind & Body Therapy. “My senses are stimulated by the aroma of delicious food from the street vendors, the sound of local musicians and the bright colors and textures of locally-grown foods. This is one reason I love SLO: We are a community that fosters family-run farms and businesses. There’s no better way to showcase that support than through our Thursday night farmers market.”

“The farmers market is an economic and tourism juggernaut, to be sure,” said former City Manager for San Luis Obispo, Ken Hampian. “But more than that, it’s a civic gathering place, an opportunity for local residents to interact.”

“From day one, the market has meant so much to us,” said Mike White, owner of Boo Boo Records, one of Rolling Stone magazine’s top record stores in the nation. “Aside from the statewide (and beyond) spotlight it brought to SLO that has resulted in year-round attention, the actual Thursday night spike in business has been huge. Really, the farmers market took SLO to the next level in terms of our ranking among small towns in America and Boo Boo’s is forever grateful.”

For more information about improvements or the April 9 kick-off party, please visit DowntownSLO.com/Farmers-Market or call the San Luis Obispo Downtown Association at (805) 541-0286.