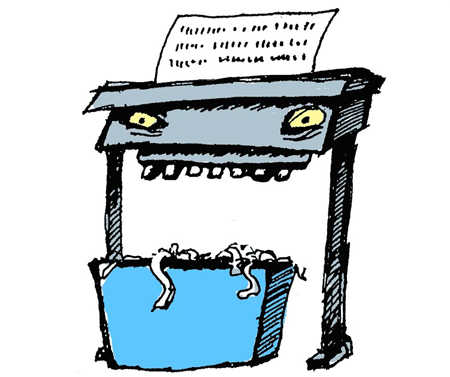 The Shredder’s logo from the SLO New Times.

The sad case of former Paso Robles Police Sgt. Christopher McGuire certainly doesn’t engender much faith in the police or SLO County District Attorney Dan Dow. A federal lawsuit shows that in 2017, McGuire allegedly raped a Paso Robles woman and continued to stalk, terrorize, and harass her in the following months. She eventually reported McGuire’s actions to the Santa Cruz Police Department. What was she supposed to do? Go to the Paso Robles PD?

Her report triggered a Paso PD internal investigation, which was later taken over by the SLO County Sherriff’s Office, which apparently found that McGuire had sexually harassed or assaulted multiple Paso women for years…

Speaking of Paso, I guess we can thank you and a bunch of reckless Cal Poly students for putting SLO County back in the COVID-19 purple tier. Wouldn’t it be great if people would follow health guidelines? Instead, Poly kids are partying like it’s February 2020, and Paso is apparently populated by rugged individualists who don’t believe COVID-19 is dangerous…

Oh, and sorry to kick a downed dog, but Paso Robles Joint Unified School District just got a grand jury beatdown for completely demolishing its finances again. Titled, “Paso Robles School District: A Cautionary Tale,” the report details how “failures in leadership and management” led the district to “fail its students and the community it serves.”

The Shredder is often criticized for its sharp tongue and anonymity. Opinion writer Keith Gurnee last year wrote, “The Shredder, who takes great joy in reveling and thriving in the salacious, is nothing more than an anonymous propagator of hate, rumor, and nastiness who doesn’t have the courage or decency to disclose his or her name.”

The New Times was started in 1986 by Steve Moss, it is now published by Bob Rucker and Alex Zuniga, edited by Camillia Lanham. It reports a circulation of 35,000 copies.