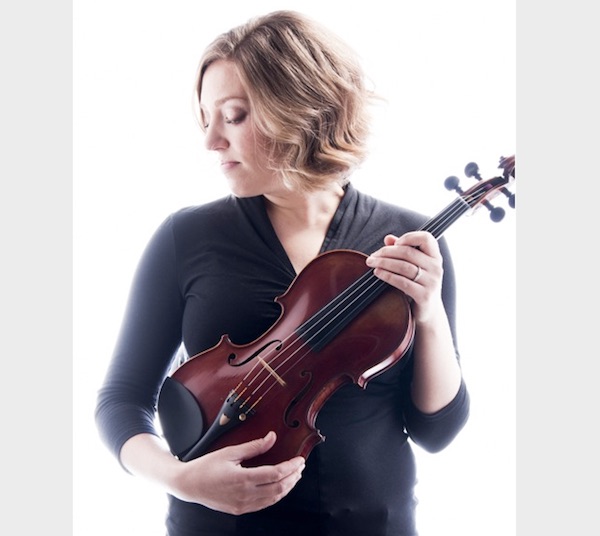 –Brynn Albanese recently resigned from her role as SLO Symphony Concertmaster. With Albanese’s departure, Associate Concertmaster Emily Lanzone has been tapped as her replacement.

A highly sought-after violinist and founder of Cambria Concerts Unplugged, Albanese played with SLO Symphony for ten years. She served as concertmaster for the past three seasons, frequently thrilling the audience with her moving solos.

Music Director Andrew Sewell accepted Albanese’s resignation last week. “Brynn has a great passion for personal growth and creativity,” Sewell says. “While we are saddened by her decision to leave, we respect that she has chosen to pursue new avenues for her music, and wish her the greatest success in her future endeavors.”

“It has become clear to me during the past eight months that my musical life is heading in a very different direction,” says Albanese. “I am transitioning from performing with large ensembles and chamber music into a life of musical service to others in the health and educational sectors.”

With reduced opportunities to perform during COVID-related shutdowns, Albanese dedicated her downtime to earning a Music for Healing and Transitions Practitioners (MHTP) certificate through SLO County Hospice. The program trains musicians to provide therapeutic music to patients.

While unable to hold traditional concerts in the PAC, SLO Symphony adapted its offerings for the 2020-21 season to accommodate socially-distanced drive-in and virtual concerts. This means pre-recording a number of small chamber groups for each concert. Lanzone’s involvement was instrumental to the success to-date of the Symphony’s modified concerts.

“Emily is the natural choice for Concertmaster,” says Sewell. “She has shown great strength and leadership as Associate Concertmaster for the past three years, and especially these past few months.”

“Emily was a strong candidate during the concertmaster auditions three years ago and has proven to be a very capable leader, soloist, teacher, chamber musician, and colleague during this time,” says Sewell. “She also serves as one of our SLO Youth Symphony conductors. We welcome Emily to her new role as concertmaster.”

Lanzone earned a bachelor’s of music in violin performance from the University of Oregon, a master’s of music from the University of Nevada, Reno, and a professional studies diploma from the San Francisco Conservatory of Music. She was appointed Associate Concertmaster of the SLO Symphony in 2017, and is a frequent guest in many California orchestras, including Fresno, Santa Maria, Monterey, and Santa Barbara. She is also a member of the Santa Cruz Symphony, and the Oregon Coast Music Festival in Coos Bay, Oregon. Lanzone is a member of the music faculty at Cuesta College and Cal Poly, maintains a private studio of violin and viola students, and is also actively involved in SLO Symphony’s music education programs as an instructor of the Super Bows young string ensemble.