Johnny Manuel Guerrero had warrant out for lewd acts with a child, other charges 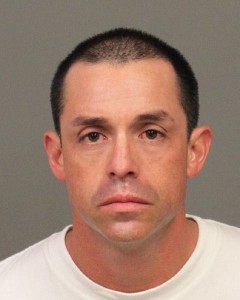 Guerrero had recently been featured on the Most Wanted Wednesday segment of the Sheriff’s Office Facebook page. Sheriff’s deputies received a tip that Guerrero was staying at a motel in Arroyo Grande. Deputies caught up with him as he was leaving the motel and heading southbound on Highway 101. He made a U-turn at El Campo Road in Arroyo Grande and began driving northbound on the 101.

Deputies attempted to initiate a traffic stop at the Price Street exit in Pismo Beach but Guerrero refused to pull over. For eight and half miles he led deputies on a slow speed pursuit on the highway with speeds never reaching above 65 miles an hour. Guerrero pulled over near the Prado Road exit in San Luis Obispo and was arrested without incident. A loaded gun was found in the car.

He was booked into County Jail. Guerrero faces additional charges of possession of a loaded firearm in public and evading a peace officer.