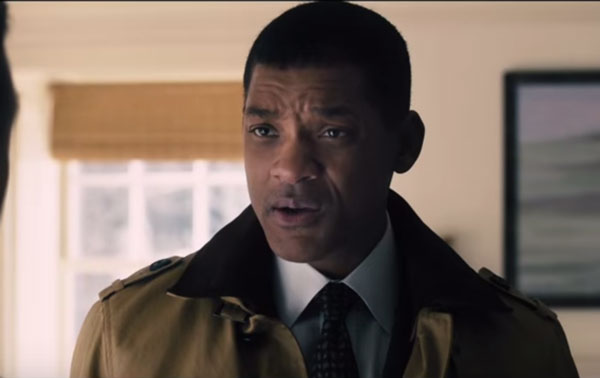 Actor Will Smith stars in the new movie “Concussion.”

I have always loved sports, but one sport has always stood about the rest — the NFL. I live for Sundays in the fall, watching games nearly all day and managing a handful of Fantasy Football teams.

Over the past few years, it’s been hard to ignore how the game — or rather the perception of the game — has changed. The focus has been on safety, rightly so, and it’s changed the way the game is played.

It’s also changed the way we think about football. I can remember, growing up, watching for the big hits. The highlights always included scenes of men being violently thrown about. We celebrated it. We cheered for it. We watched the games hoping to see it.

Then came all the discoveries about the high cost of professional football and head injuries. Now, all those huge, catastrophic collisions elicit another reaction — a cringe. You can’t help but wonder about players and their long-term future.

As a Broncos fan, I worried about Wes Welker every game last season. Each time he caught the ball, there was a fear about him getting concussed — again — and what that might mean. And he’s not the only one.

The new film, “Concussion,” puts the crisis in focus. It follows Dr. Bennet Omalu (Will Smith) as he discovers and names CTE, a condition that causes brain degradation following chronic, long-term trauma that occurs during contact sports like football. His discovery revolutionized sports medicine and brought greater awareness. But it also put a spotlight on something that has serious ramifications for the NFL, making him a threat.

Omalu began his path to discovery after being the pathologist on duty when Mike Webster (David Morse) was brought in. Webster was a star for the Pittsburgh Steelers and a favorite son who died in disgrace at far too young an age. While many wanted to dismiss the case, Omalu dug deeper and discovered something alarming in Webster’s brain.

Webster wasn’t an isolated case. Working alongside his mentor — Cyril Wecht (Albert Brooks) — and a former Steelers team doctor — Julian Bales (Alec Baldwin) — Omalu worked to bring his research to light. Along the way he encountered plenty of opposition — particularly from the NFL, who thought his findings would damage their product and their bottom line.

Despite that, Omalu remained steadfast in the truth of his findings, even when it cost him and his wife, Prema (Gugu Mbatha-Raw), personally as well.

“Concussion” is a difficult movie to watch at time, particularly for those who love to watch the NFL. I see it as a beautiful and compelling game, but it’s impossible to deny the risks associated with playing the game. The research is now widely accepted, and new advancements in safety are made every day. But this film chronicles the events a decade earlier that put the whole thing in motion.

Writer/director Peter Landesman focuses some on the science and the research done by Omalu, but most of the movie actually focuses on Omalu himself. Omalu was a dedicated professional who refused to bow to public pressure to recant, even when it cost him his life and home in Pittsburgh. He was dedicated to the truth, and to protecting men who he viewed as warriors.

Smith, who is known as a suave performer, does something radically different here. He channels the quiet confidence of Omalu and delivers a great performance. He was nominated for a Golden Globe and has a shot at an Academy Award nomination, too. He carries the film, bringing the narrative to life in a vibrant way.

In 2015, anyone who follows the NFL and even most who don’t are familiar with the dangers of head injury and the risks of playing professional football. But “Concussion” tells the story of the man who risked his reputation and family to make sure the world learned the truth. The man who was committed to finding out why our heroes of the gridiron were suffering so much in their post career lives. And the world is better for it.

“Concussion” has been rated PG-13 by the Motion Picture Association of America for thematic material including some disturbing images and language.