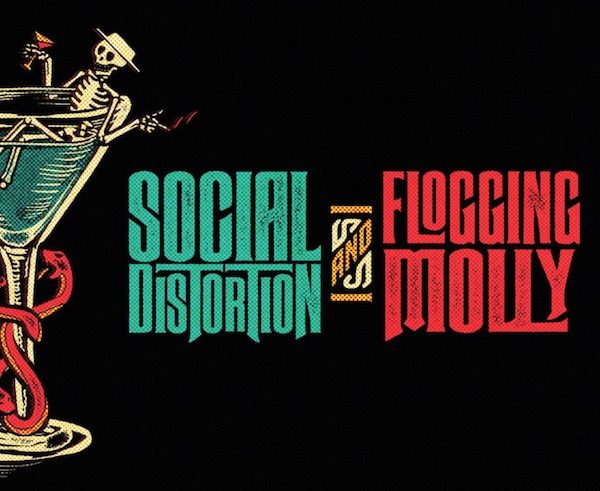 “We’re excited to be heading out on the road with our friends Flogging Molly this summer,” vows Social Distortion frontman Mike Ness. “It’s been a long time since we’ve played a show together and the first time since ’92 that Social Distortion has done a co-headline tour. It’s going to be a lot of fun and we’re all looking forward to it.”

Since their formation in 1979 in the working-class Southern California suburb of Fullerton, Social Distortion have a recharged rock ‘n’ roll sound merging outlaw country, classic punk and swaggering blues. The band’s last release Hard Times and Nursery Rhymes was the first album with their current label Epitaph Records and the band’s highest charting album in their career. Produced for the first time by Ness himself, the album debuted at #4 on the Billboard Top 200 Albums Chart. As the band is now in their 40th year and still going strong, look to make this tour the start of their 2019 festivities while also preparing to head back into the studio to start a new chapter to their already rich legacy.

Flogging Molly is a staple in the punk scene and touring in support of Life Is Good, their first new album in over six years. It’s filled with rousing songs that are timeless in their sentiment, but directly related to today’s most pressing concerns: politics, the economy, unemployment, planned boomtowns gone bust, immigration policies gone awry, and much more. Life Is Good serves as a wake-up call to those who have simply stood by while far-reaching political decisions were made that had serious impact on them.

Tickets available at the Vina Robles Amphitheatre box office during business hours, online at Ticketmaster.com or charge by phone at 800-745-3000. All dates, acts and ticket prices subject to change without notice. A service charge is added to each ticket price. For more information, visit www.VinaRoblesAmphitheatre.com.