Brown has 17 years of radio experience 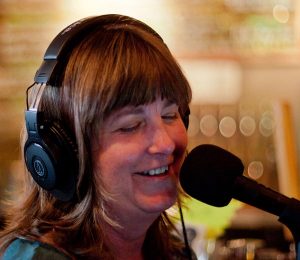 – Sonnie Brown, professional voice actor and KCBX Public Radio host of 17 years, begins a new program, Sonnie Brown On The Town, on Central Coast Live Radio. Sonnie is the radio voice of Big Big SLO’s weekly concert series Beer at the Pier from the Back Bay Cafe located in Los Osos every Monday from 5 to 7 p.m.

“We’re very excited to welcome Sonnie to our team,” says Brad Golden, the company’s founder. “She has an amazing gift in connecting with both musicians and music lovers in person and during her radio broadcasts. Sonnie has a wonderful sense of timing and delivery on air that really draws listeners into her interviews and shows. I know many people, including myself, are really excited to hear that Sonnie has returned to the airwaves.”

In addition to Beer at the Pier, Central Coast Live Radio will also broadcast other local area weekly music events from the heart of the Central Coast. The Paso Robles REC Foundation approved the live radio broadcasts of the Paso Robles Concerts in the Park series starting on Thursday, June 16 through Aug. 18 from 5:30 – 7:30 p.m. Blues lovers anywhere can tune in every other Sunday from 5 – 8 p.m. and hear live broadcasts of The Pittman’s Blues Jam, streamed from The Pour House in Paso Robles. Fridays from 12 – 1 p.m. Brad and Jennifer Golden host Acoustic Lunch Live, a weekly live radio show held at the D’Anbino Tasting Room in Paso Robles. The show features local musicians and bands, is open to the public, and offers the opportunity get up close and personal with some of the region’s best talent.

Central Coast Live Radio, launched in 2015, is the only station exclusively playing local music from the California Central Coast, 24 hours a day. The station’s line-up features musicians and bands from Ventura to Santa Cruz counties, including artists such as Grammy Award winner Louie Ortega who performs with Freddy Fender’s Texas Tornadoes, Kenny Lee Lewis with the Steve Miller Band, Travis Warren of Blind Melon and Ras Danny formerly of Black Uhuru. Many artists on the station, like Dulcie Taylor and Joe Koenig, have shared the stage and opened for national such acts as Jerry Lee Lewis, Merle Haggard, Bonnie Raitt and Jeff Bridges.

Music fans can enjoy Central Coast Live Radio by downloading the free apps from the Apple and Google Play stores to listen on the go with mobile devices as well as listen to the radio player available online at CentralCoastLIVE.com.

Local artists are invited to submit music for consideration at www.CentralCoastLIVE.com/initial-artist-submission.