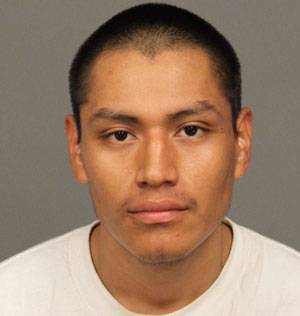 On Saturday at 1:10 p.m., the the San Luis Obispo County Sheriff’s Office received a 911 call regarding a disturbance in the parking lot of the Sheriff’s North Patrol Station, at 356 N. Main St. in Templeton, between a subject and his family.

The suspect, later identified as Juan Josue Salgado, 20, of Atascadero, subsequently broke a window at the patrol station and then climbed onto the station’s roof where he engaged in vandalizing roof-mounted equipment and ventilation.

Upon contact by Sheriff’s deputies, Salgado refused to come down and a standoff ensued. With the assistance of a CHP helicopter, CHP ground units, and a Sheriff canine, Sheriff deputies confronted Salgado on the rooftop.

Salgado attempted to flee by jumping from the roof to the ground where he was immediately apprehended without incident nor injury at 2:25 p.m.. Salgado was arrested, transported and booked into San Luis Obispo County Jail for felony vandalism and resisting/obstructing arrest. He is currently in-custody at County Jail and is being held in lieu of $15,000 bail.