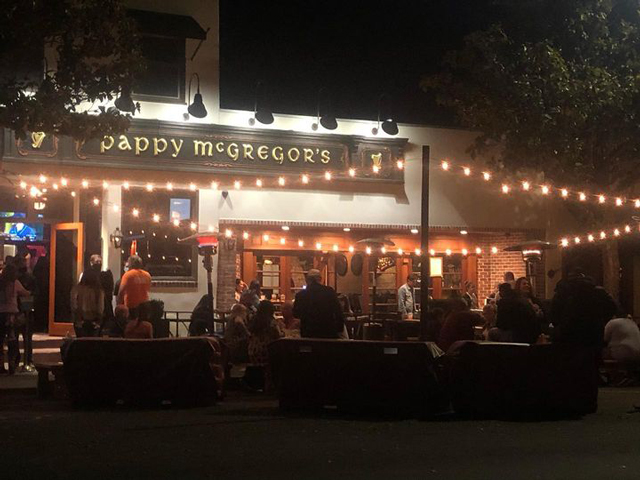 Pappy McGregor’s gastropub and cocktail bar in downtown Paso Robles was visited recently by the ABC and warned about indoor dining.

“We have been given a warning from ABC regarding in-person dining,” the restaurant posted on Tuesday to social media. “We have tried as long as possible to operate in a socially distant and safe manner, while still giving our guests the experience they expect at Pappy McGregor’s, without jeopardizing our licenses. In order for us to preserve our place in Paso Robles for the long haul, we must scale back our service for the time being.”

Restaurant owner Donovan Schmit said the ABC did a drive-by visit on Dec. 15 and again this past Tuesday afternoon. “On the first drive-by in December they said they had received a large quantity of complaint phone calls about all the restaurants being open since the last stay at home order was placed on Nov. 30th,” he said. “After that drive by in December, they issued several written warnings to us and other restaurants that we operating against the stay at home order. Our local agent was very sympathetic to our situation and noted although he didn’t want to enforce this, his orders were coming from Sacramento.”

“We continued operating as normal since the written warning didn’t have a penalty or fine or any other details, so we considered it ‘strike 1’ or a slap on the wrist,” Schmit said. “This past Tuesday he called me personally and said he was directed by Sacramento again to follow up on Paso Robles due to the high volume of complaints still coming in about all the restaurants still ignoring the stay-at-home order. On this drive-by he witnessed all of us still open, and busy, so he was forced to give us our 2nd warning, ‘strike 2’. He mentioned now that we have been warned twice and have continued to ignore the governor’s orders, on the next violation we would face a 10-14 day suspension, along with additional fines.”

“With Paso being on the map now with the state as a city unified in ignoring the stay at home order, the ABC would be more active and more present over the coming days and weeks,” he said. “So, now we are standing at the edge of the cliff and faced with a decision. Do we continue ignoring and risk or license or fall in line so we don’t get ‘strike 3’? We have chosen to pull back our dining service and offer the take out model that is approved by our state.”

“Our No. 1 priority has always been our employees,” Schmit says. “We have a duty to them to give them a place to earn a living, therefore we decided to stay open since Nov 30. Our second priority is to make sure we as owners have a successful business that is set up for longevity. Jumping off that cliff would ignore that priority. It was a very tough decision choosing not jeopardizing our business and license for the future over the ability to provide our staff with a place to earn a living.”

Pappy’s isn’t alone. There are about 50 open investigations in the county, an ABC spokesman says. Statewide, the ABC has issued 184 citations to liquor license holders. Citations were issued for offering indoor service; employees not wearing face masks, no social distancing measures, and onsite consumption of alcohol. Fines can be as high as $1,000. So far, the ABC has not issued any citations in SLO County.

In December, San Luis Obispo County was placed in Gov. Gavin Newsom’s strict Regional Stay at Home Order due to a surge in COVID-19 cases throughout the state. State guidance for restaurants permits only take out and delivery. It orders tasting rooms, bars, breweries, and distilleries closed. The Paso Robles City Council passed an ordinance supporting local businesses, and local enforcement has consisted of seeking voluntary compliance.

Pappy McGregor’s restaurant posted, “it’s time to roll with the punches. When visiting, guests are able to order takeout food and drinks from the bar. Should guests desire, they will follow a host to sit at the tables located on our sidewalk and parklet, prior to ordering, and enjoy their packaged takeout there. Unfortunately, we will not be offering seating on our front or rear patios. Guests may return to the bar for additional drinks if they like throughout the meal. Once the table is cleared it will be diligently cleaned and sanitized before it is reseated.”

“We are frustrated with the reality we are facing, but want to stress that our goal is to be here long term. Paso Robles is our home, and we cannot thank you, our friends and neighbors, enough for your support over the past year. Takeout can be ordered in person at our bar, as well online or by phone (805) 238-7070. We are open daily 11 a.m. – 8 p.m.”

Editor’s note: This story was updated to include additional comments from Donovan Schmit.