Paso Robles News|Friday, December 2, 2022
You are here: Home » Business » State of the North County meeting discusses the future of brick and mortar retail 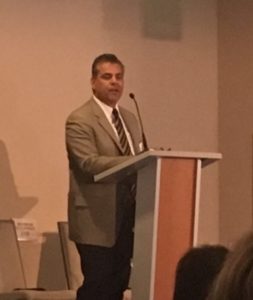 Ken Hira speaking at the State of the North County.

“Brick and mortar retail is not dying, it’s just evolving.” That’s the message from Ken Hira of Kosmont Companies, keynote speaker at State of the North County 2018, sponsored by Chambers of Commerce in Atascadero, Paso Robles and Templeton. Hira says that online sales are only 9% of the total, and he doesn’t see that changing appreciably. He said recently restaurant sales exceeded grocery sales for the first time. “People are busy,” he said.”They often eat on the run.”

Hira asked the 180 people in attendance to raise their hands if they were millennials. A handful of young people did so Tuesday morning at Springhill Suites by Marriott in Atascadero. Then Hira advised the audience, “Millennials will drive the economy.” Baby boomers, however, still make up the largest percentage of the North County population. Regardless, Hira said that social media will grow in importance because of the impact of millennials and the need for retailers and service industry people to reach out to their customers.

Besides Hira’s keynote speech, the business and government leaders also heard from Brooke Burnam of Visit SLOCAL, who showed a video her group developed to promote tourism in the North County. Mac Lea of the Agriculture Commission spoke about the state of agriculture. He says there are two main crops- wine and strawberries, but cannabis is growing in importance. 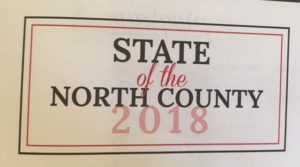 Eleze Armstrong of Twin Cities Community Hospital talked about her facility’s contribution to the North County. She says Twin Cities emergency room treats 35,000 cases a year. She says the hospital recently received the Stroke Gold Plus Care Award from the American Heart Association for exceptional care.

Amanda Wittstrom-Higgins of Ancient Peaks Winery talked about experiential travel. She described how her winery uses the historic Santa Margarita Ranch to create experiences for wine tasters and visitors. The ranch offers zip lines, wedding sites and a cafe, which are accessible to wine tasters. Amanda showed a stunning promotional video shot at the ranch. “Doug Filiponi may be nominated for an Emmy,” she said. Filiponi is one of the owners of the Santa Margarita Ranch and Ancient Peaks Winery. 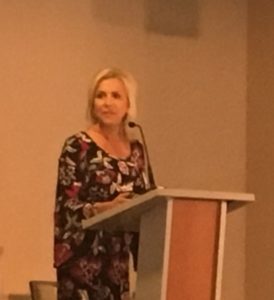 Andrew Hackleman of the SLO County Home Builders Association talked about the challenges for housing in San Luis Obispo County. He says the North County faces many of the same challenges as other areas of California.

Mike Manchak of the Economic Vitality Commission said the State of the North County was a great success again in 2018. He said it touched on tourism, manufacturing and housing and created a foundation for future discussion and planning in the private and public sector.