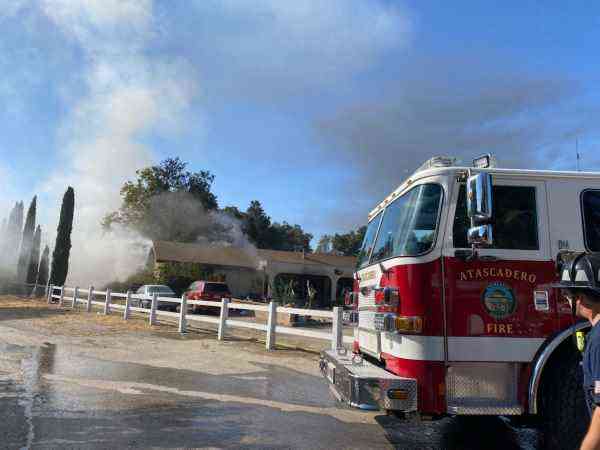 Crews are still investigating the cause of the blaze

–Atascadero Fire and Emergency Services responded to a residential structure fire at 8660 Portola Road at 9:25 a.m. on Sunday. Initial reports indicated that the structure was fully engulfed and all occupants were able to exit the structure.

Upon arrival, crews found a single story, single family home with heavy smoke and fire showing from the southeast corner of the residence. There were ten occupants that were able to exit the structure with one family member who cut their arm and another that initially thought there was a missing person. The missing person was not inside the home and all were accounted for. The injured occupant was transported to a local hospital. The extent of their injury is unknown. Four dogs were also inside the residence at the time of the fire with one that needed to be saved by firefighters and reportedly transported to an emergency vet.

Full extinguishment of the fire took approximately 90 minutes from the time of the alarm, with no injuries to firefighters. The emergency resources used for the incident included seven fire engines, one command vehicle, two ambulances, and three police officers. Automatic Aid was received from Atascadero State Hospital, Templeton Fire & Emergency Services, Cal Fire and Paso Robles Department of Emergency Services.

EMS crews administered medical treatment to one of the residents for smoke inhalation and another for lacerations to his arms. Fire crews remained on scene for salvage operations and investigation for approximately 2 1/2 hours. The cause of the fire still remains under investigation.