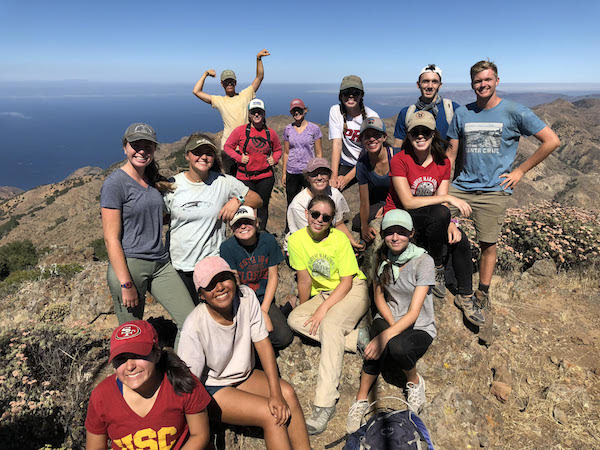 –Standing on the western tip of Santa Cruz Island, Jill Schlickeiser gazed down the windswept hillside at the native bunchgrasses she just surveyed. Miles away, Laura Santos had her eyes fixed upward, peering through the 100-inch telescope that Edwin Hubble first used to unlock the cosmos. Closer to home, Brooke Milder kept her eyes shielded behind goggles as she worked in a chemical research lab at Cal Poly.

Eighteen students and six chaperones from Paso Robles High School completed an epic eight-day research adventure on Santa Cruz Island, one of the channel islands located off the coast of Santa Barbara. This FSC course provides an opportunity for students to spend a week on the remote island while conducting research on the island’s plant communities.

The trip began with a drive and overnight stay in Ventura, followed by a two-hour boat ride aboard Island Packers to Prisoner’s Harbor on Santa Cruz. The group then split six nights on the island staying at the University of California Field Station – a complex of dorm rooms and research labs – and “Christy Ranch,” a remote and windswept adobe ranch house built in the 1860’s on the westernmost end of the island.

The course is a unique partnership with Paso Robles High School and both the University of California and The Nature Conservancy. It benefits students by providing them an opportunity to learn field biology methods while helping gather scientific data critical to the protection of sensitive island habitat. Both the UC and The Nature Conservancy benefit as they utilize the data gathered to inform and guide management plans for the island’s unique plants and animals.

In addition to botanical studies, students were treated to an archaeological seminar from Dr. Jay Reti, a Paso High grad from 2002 and now a professor at UC Santa Cruz is one of the trip’s leaders. “Dr. Reti adds so much to the trip!” says Sarah Jagger, a senior on the trip. “With his deep knowledge of Native American artifacts, we were given a window into the way Chumash lived for millennia on the island.” 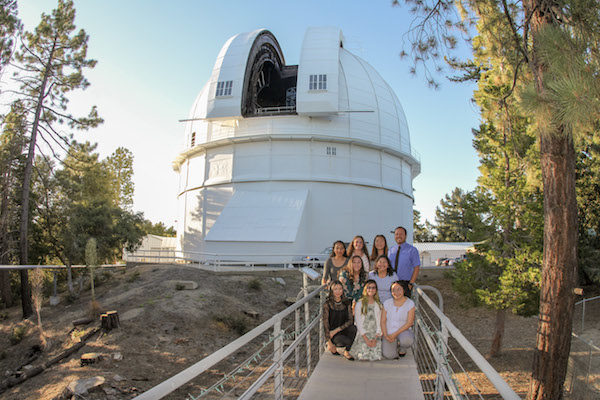 A week before the Santa Cruz Island Trip, eight other PRHS students concluded their FSC Astrometry course up at Mt. Wilson Observatory in the San Gabriel Mountains, north of Los Angeles. The observatory’s famous 100-inch telescope was the largest in the world from 1917 until 1949 and was key to Edwin Hubble’s discovery of our expanding universe, providing evidence of the Big Bang.

In the weeks leading up to the stay at the observatory, students worked with Cuesta College and Cal Poly Astronomy professor, Russell Genet, to select a binary star system and request time on a robotic telescope in Tenerife, Spain. Students then analyzed the images and calculated the precise position and separation of the two orbiting stars. With thousands of double stars to monitor, the students’ research helps astronomers better understand stellar evolution and the history of our galaxy.

“It was awesome to gain a deeper understanding of our galaxy while contributing to actual astronomical research,” said Santos. A formal paper was written by the students and is being published in the Journal of Double Star Observations. Not very many high school students will head off to college as published researchers, PRHS students are getting trained to become leaders in their STEM majors.

Each summer, hundreds of undergraduates at California Polytechnic State University in San Luis Obispo (Cal Poly-SLO) participate in research under the direction of the faculty in the College of Science and Mathematics (COSAM). As part of the FSC University Research Experience, Paso Robles High School partnered with the Department of Chemistry and Biochemistry to place four PRHS Bearcats alongside Undergraduate Student Mentors (USM) and Cal Poly Professors to complete unique and original research.

Two Paso High students worked with Dr. Eric Sapper and his teams in the area of polymers and coatings, using computer modeling and Volatile Organic Compound (VOC) analysis. They learned how chemical structures are modeled using computers and completed computational chemistry simulations to be compared to those results being found in the laboratory. Another area of focus this summer was creating quantum dots. Quantum dots are nanoparticles of various sizes and dependent on their size emit different colors of light. These quantum dots are changing the way we look at various commercial applications including aeronautics, textiles, and other technologies. Our Bearcats were also able to attend several workshops where they went to presentations from experts in the field from around the country.

Brooke Milder worked with Dr. Andres Martinez in the area of biochemistry, creating paper-based microfluidic diagnostic devices as part of designing more effective and efficient immunoassays for quick and portable field analysis. Brooke focused on creating devices with different shapes to test and analyze lateral flow efficiencies. This allows the team to pick the best design for the given immunoassay being performed. 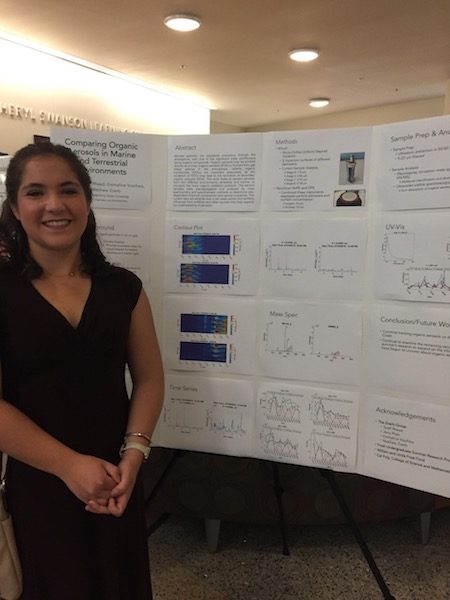 Lastly, PRHS Graduate and future Cal Poly Mustang, Emmaline Voorheis worked with Dr. Zoerb. The primary focus of this lab group was in aerosol counts and compositions in SLO county.

Lastly, PRHS Graduate and future Cal Poly Mustang, Emmaline Voorheis worked with Dr. Zoerb. The primary focus of this lab group was in aerosol counts and compositions in SLO county. In analyzing both the size and weight concentrations of daily particle counts, collected from both the Cal Poly SLO campus and from the Cal Poly pier in Port San Luis, they were able to track the size of the summer’s California wildfires, mainly the Carr and Mariposa fires, and their impact on the air quality in SLO county. To collect these particle samples, the group used a Micro Orifice Uniform Deposit Impactor, or MOUDI, which draws in air from the surrounding area and collects particles in “stages” based on size, stage 1 being the largest and stage 8 being the smallest. They were then able to liquify these samples and analyze them for size and chemical composition.

Santa Cruz Island Summer Field Biology, the Astrometry Field Research Seminar, and Cal Poly University Research Experience are all part of the Field Studies Collaborative at PRHS. They are a series of short courses that occur outside the school day that provide students hands-on experience in real-world scientific research. Other FSC courses include “Marine Intertidal Research,” “Joshua Tree Climate Change,” and “Ethnic Studies and Oral Histories.”

Each FSC course is partnered with a university or other agency such as The Nature Conservancy, The Institute for Student Astronomical Research, The National Oceanic and Atmospheric Administration, or the National Park Service. More information can be found at pasoschools.org/fsc.