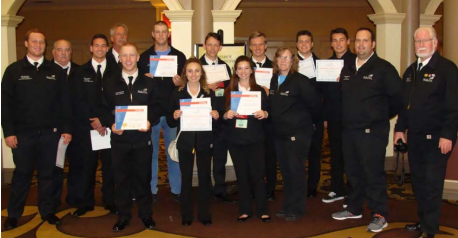 –PRHS students and advisors attended the 53rd Annual National Leadership & Skills Conference in Louisville, Kentucky this summer. In all, 6,000 students competed in over 100 occupational contests.

The week began Monday evening with welcoming dinners for each state and their conferees. Opening ceremonies were held on Tuesday with the keynote speaker, Nick Tokman of the TV show “Deadliest Catch.” The remaining evenings were filled with baseball games, Louisville Sluggers, and Kentucky Kingdom Amusement Park.

As students competed, advisors received training in many different sessions. These SkillsUSA University sessions
informed the advisors of new and long-term methods of preparing students for the workforce and being job-ready on day one. Students continued competition through Thursday afternoon and, for many, this was the first time they had spent that many consecutive hours working in their occupational pathway. Students had debriefings with the industry persons who developed and ran their contests on Friday afternoon and that was followed by the awards ceremony.

Mason Brown, Eli Lewis and Nick Matteson will return to PRHS SkillsUSA next year and compete in their pathway.

Anyone interested in contributing or volunteering for the Region 2 Conference in February 2018 should contact Randy Canaday (805) 674-4170 or rcanaday@pasoschools.org.