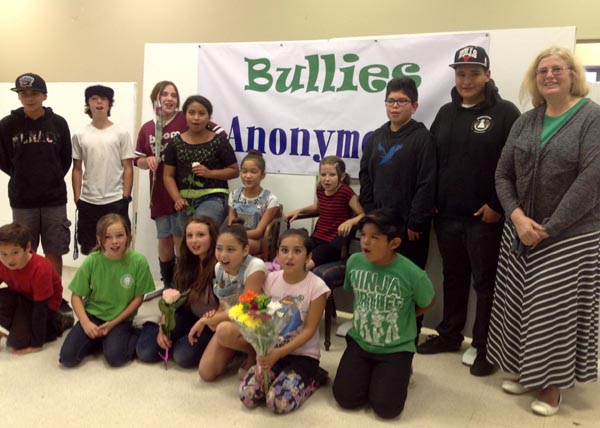 Under the direction of Mrs. Michelene Landseadel-Sanders, the after school theater program students at Lillian Larsen School performed a melodrama and a comedy musical before a packed house on Friday, May 29. The performance also included a dinner before the entertainment began. Proceeds from the event will go to help future theatrical productions at the school.

The students, ranging from 3rd through 8th grade, had been rehearsing for the past two months in preparation for the dinner theater presentation.

The melodrama was written by Sanders, who has a masters in English and many years of english teaching experience. Besides running the theater program, Sanders also teaches honors 8th grade english at the school. Sanders also helped to create the costumes for the show.

The melodrama, “Big Shot on Banker Street,” is set in the early 1900’s, and according to Sanders, tells the story of two families; one rich and one poor. In the play, the rich family owns a piece of property that the poor family resides on, and when the matriarch of the rich family hires two henchmen to get rid of the poor family, her son steps up and foils their plans, vouching for the poor family’s industriousness and honesty.

The musical comedy was called, “Bullies Anonymous,” and, according to Sanders, “Is one gag after the next.”

“The response was really positive, everybody had a really great time,” said Sanders.