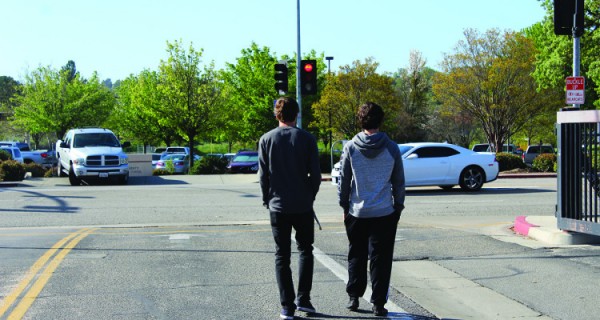 From the Crimson Newsmagazine

If you haven’t seen it floating around campus, the current petition has seen enormous support and has over 600 signatures, thanks to seniors Alex Younger and Sam Nevosh, petition leaders. Most of the signatures are from students, because teachers are worried about the liability issues that an open campus would create, according to Younger. Liability is a big concern preventing the majority of SLO County campuses from open lunch policies: only Atascadero High School approves, of the nine main high schools in San Luis Obispo County.

Despite this, teachers like Land know that this is an important project because the petitioners are practicing student free speech, peaceful protest, and the opportunity to engage in campus politics.

“Until now I didn’t know what I was doing, but once I got into Mr. Land’s class, he was able to give us the guidance that we needed to start working on it,” Younger said. With the help of Land, they wrote up an official document stating the reasons and guidelines. The first of these states, “Whereas the mission of PRHS is to prepare students for success and independence…” Having an open campus, the petitioners believe, is another step toward independence, something that many students at PRHS will be facing soon. It declares that students are being a denied a “basic freedom” of a “wider, better range of food choices.” They also claim that an open campus would improve behavior, therefore adding to the new PBIS program.

“Open campus could potentially increase students academic records by being motivated to have the privilege of an open campus,” Nevosh said.

Principal Jennifer Gaviola says the main concern though is student safety. “It’s just really looking at the opportunities that it would grant for kids, do they outweigh the impact on student safety?” Gaviola said.

The students behind this petition also offer some guidelines in order to make it a privilege instead of a freedom. All who participate must be in grades 10-12, have at least a 2.0 GPA, have no more than one F from the previous semester’s grading period, and no serious behavior or attendance problems.

Junior Evan Prolx said, “I feel like it will give us more food choices.” Junior Cheyanne Willis said, “I think they should definitely allow it.” Freshman Jessica Huggard said that, “Atascadero does it so we should do it, too.’