From the Crimson Newsmagazine 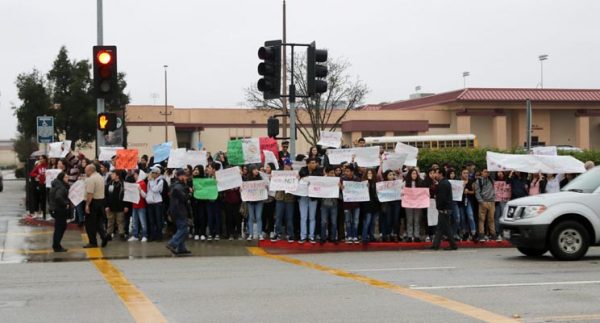 –Around 300 students of all nationalities swelled, chanted, and raised signs under the awning at lunch Thursday, Feb. 16 to hold a protest on equal rights for immigrants. The marchers walked from the PRHS quad to the sidewalk by the front of the school, where passing cars on Niblick Rd. honked horns in support and students cheered. For the next 20 minutes, the protesters, holding signs “Bridges not walls”, “Immigrants make America great”, and “Respect my heritage”, did a loop around campus chanting in unison and showing support for immigrant rights. Protest organizers included seniors Daniela Lopez, Solanda Magnuson, Maricela Garcia Serrano, Cindy Barrera, Lupita Uribe, Celso Ortiz, and Raul Morales who galvanized the protest within a matter of hours over text and Snapchat.

The nationwide #DaywithoutImmigrants movement prompted the school protest, which also happened on Feb. 16, in which students and employees boycotted schools and jobs. The students who attended school decided to hold a protest in lieu of staying at home. During the hour prior to lunch, the band of organizers made signs, called local media stations, and used social media to spread the word about the lunchtime protest.

“I’m protesting for the rights of all Mexicans. For Donald Trump to believe that all immigrants should go back to Mexico, that’s not right when they’re coming here for a better life, and he’s treating them like they’re nothing. We’re all humans, so that doesn’t make any sense,” said sophomore Chianne Brown on why she joined the protest.

“We saw a lot of people in our Tutorial class…who were passionate about this. At first we thought [we should do] a letter, but then we thought is a letter really going to show much of our resistance, how much we don’t like what’s going on today in this country, so we decided to start a protest… it turned out to be amazing and I’m so proud of everyone who participated ” said Lopez, who is the president of AVID.