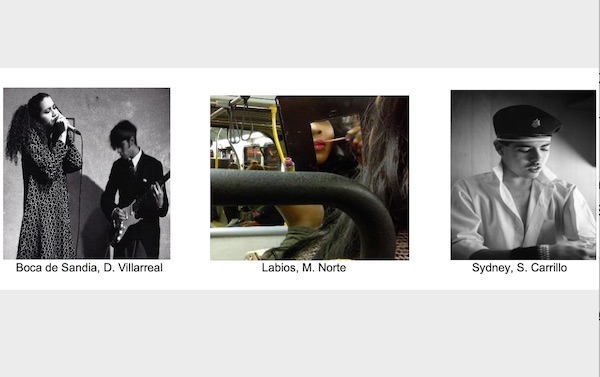 —Studios on the Park’s Sept. 2020 show, featured in the Gallery’s Studio 4, will highlight important but critically overlooked photographic works by select Mexican American producers of the past four decades: Sean Carrillo, Marisela Norte and Daniel Villarreal.

According to Studios on the Park’s Artistic Director, Henry A. J. Ramos, “the period to be examined—1980-2020—constitutes an unusually robust time of cultural awakening and activism, especially among younger Mexican Americans who came to refer to themselves as Chicanos and Chicanas—that is, working-class, Mexican origin advocates for foundational reforms in American politics.”

“But while much of the informing influence of these young people was rooted in the politics of change,” Ramos explains, “an equally potent but largely overlooked aspect of their collective expression was anchored in alternative music, fashion, and street culture.”

The 30 works featured in the show, which is titled ‘Counter Narrative,’ speak to the lesser-appreciated aspects of this history, and the continuing struggles for cultural expression by contemporary Latinx artists.

For a variety of reasons, many Chicano/a and other Latinx photographers of the time have been largely overlooked. Counter Narrative is intended to help address this oversight in public appreciation of this important but heretofore rarely seen oeuvre, focusing on recently-recovered Chicano/a contributions to the field.

As reflected in recent feature coverage by The Los Angeles Times marking the 50 year anniversary of the Chicano Moratorium in East Los Angeles on August 29, 1970, the photographs featured in Counter Narrative are a reflection of now more than half a century of Latinx struggles for cultural voice in America.

The featured collection, produced by three native and contemporaneous East Los Angeles photographers (whose career works have also extended to fashion design, movies, creative writing, and spoken word performance art), project the power and poignancy of Chicano community life dating back to 1980, when the highlighted artists were only in their late teens and early twenties.

According to Sean Carrillo, one of the featured photographers in the show who also helped to curate the collection, “these photographs are of great historical significance.” They reveal that there were Chicano/a “musicians, poets, painters and others whose work was powerful in its exploration of Western culture.”

Daniel Villarreal, another of the artists highlighted, is a Los Angeles-based photographer and actor whose extensive photographic collection is part of the California Ethnic and Multicultural Archives at the University of California, Santa Barbara. His acting credits include leading roles in the feature films “Stand and Deliver” and “American Me.”

Marisela Norte, the third featured creator in the installation, is widely acknowledged as the unofficial Poet Laureate of East Los Angeles, the center of Chicano life in the United States. Her transit poetry has been widely recognized in the U.S. and Europe, and her photographic works are evocative of both the French New Wave and the Golden Age of Mexican cinema.

The images in this show reveal the humanity and dignity, the humor and sarcasm, as well as the struggles and turmoil of the Chicano/a experience in the sweep of this current, vitally important moment in U.S. cultural and demographic transformation.

Studios on the Park is located at 1130 Pine Street, in Paso Robles.